A summary of statistics notions not found anywhere else on this blog. The post touches among others: some descriptive statistics measures, hypothesis testing, goodness of fit, Lasso and Ridge regression.

For unimodal distributions, we define skewness as a measure of whether the distribution has its its peak towards the left or the right.

A negative value means the sample has its mode to the left, a positive, to the right. Left-skewed means the tail is on the left and the mode is on the right. Right-skewed, the opposite.

For bivariate datasets, X and Y, we define correlation and covariance as measures of how X and Y move together monotonically.

A perfect correlation, 1 or -1, means that X and Y move together on a straight line. We can derive the regression line between X and Y as follows:

For the regression, we define:

For linear least squares regression with an intercept term and a single explanatory, this r is the same r as the Pearson’s correlation coefficient defined above. It measures the amount of explained variance of Y for this particular regression.

Similarly to the Pearson coefficient which is defined for the values of X and Y, we define the Spearman correlation coefficient, but instead of values we take the ranks. Spearman is more robust, thus less sensitive to outliers.

For nominal (categorical) values, we can introduce a measure of dependency and correlation. We use the Chi2 statistic to measure the independence of two categorical variables. The Chi2 test works on r rows x c columns contingency tables and assesses wether the null hypothesis of independence among variables is reasonable.

An example for its use would be to test how well different headlines for a website generate more clicks. Let’s assume an experiment with N headlines which generated either a click or a no-click. A contingency table to describe the problem would contain on the column axes the N headlines and on the rows axes click or no-click, with the counts for each in the table.

The table and the calculations below come from the Practical Statistics for Data Scientists book: 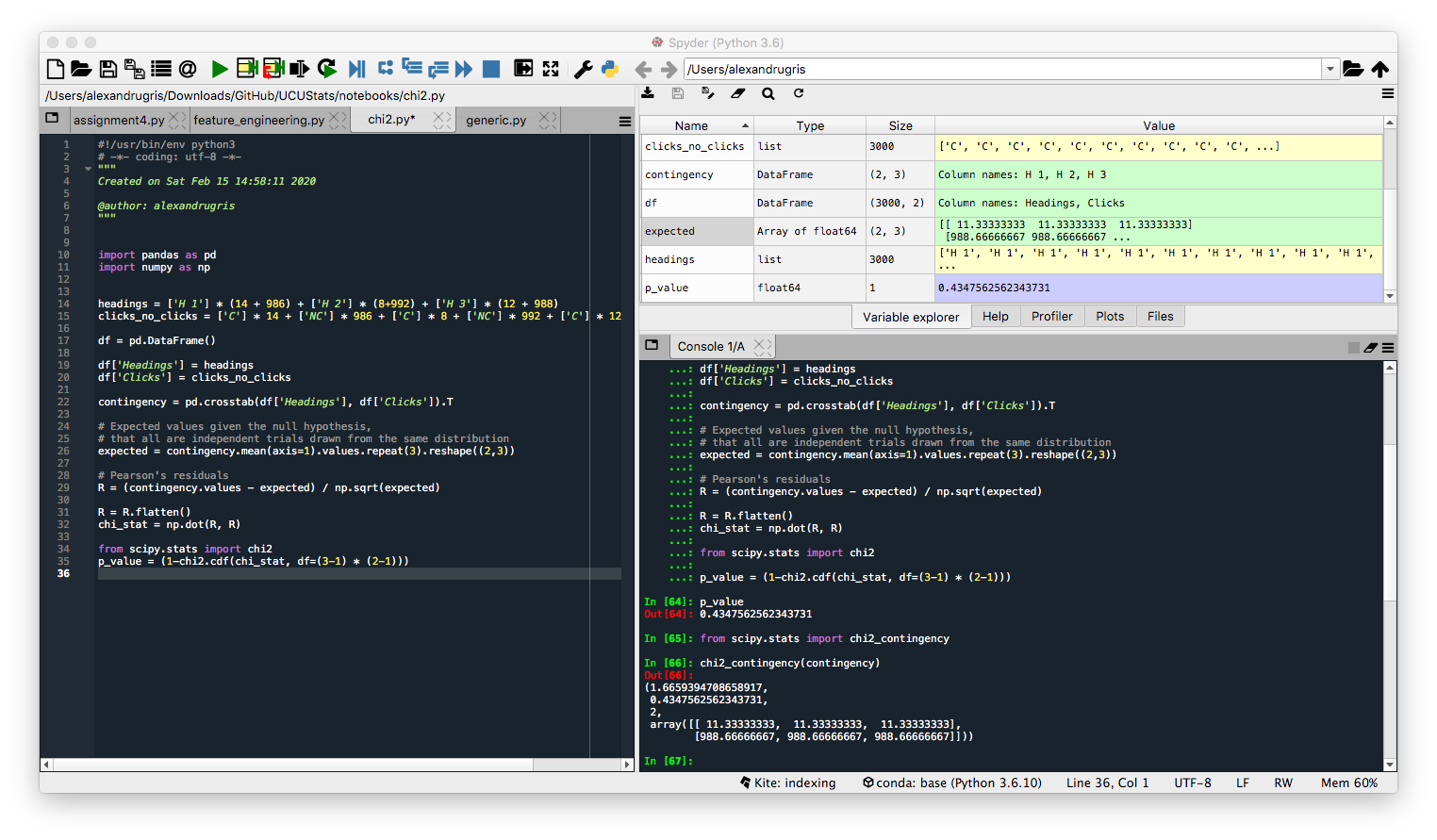 The return values are described below:

The p-values can be computed through Monte Carlo simulation, by simply sampling N times M samples with the same distribution as the expected values and counting how many times the squared sum of Pearon’s residuals (R) exceed the value obtained from our sample. That is the p-value.

If n is large enough, then the skew of the distribution of the expected value is not too large. In this case, a reasonable approximation to B(n, p) is given by the normal distribution N(n*p, n*p*(1-p)). A commonly used rule is that both n*p and n*(1-p) are larger than 10.

MLE starts from the premise that if you observe a certain sample, then its probability must be high. It is used to estimate a parameter of the distribution of the population given the observations.

The MLE problem is described as follows:

which is equivalent to

Since MLE usually uses gradient descent to find the maximum, it helps if the distribution for which we plan to estimate the parameter is continuous. Otherwise, the maximum must be found through different means.

A good estimator has low variance and low bias, both preferably 0. Bias is the difference between the true value of the parameter and the expected value of its estimator.

Hypothesis testing does not aim to prove H1, but rather to say that there is a low probability,usually under 5%, that H0 can occur. There is still thus a possibility that the results of the test occur under H0, but it is considered low. The p-values, which are used in hypothesis testing, represent the probability that we observe H1 given that H0 is true. The 5%` above is called significance level and its setting depends on the application.

We can conclude that it is unlikely that the person made the choices purely by chance.

T-tests are is used to learn about averages across two categories, for instance the height of males vs the height of females in a sample. It has several forms:

In python we use:

If the sample size is large (e.g. > 30 observations) and the population standard deviation is known, you can assume the test statistics follows the normal distribution instead of the t-distribution with n-1 degrees of freedom, thus one can apply the Z-test.

If the population variances are not equal, we need to use:

Taking the same assumptions as before, in python use:

Assumptions of the t-test:

Below is an example of how to compute the t-statistic manually in case of the regression analysis. We consider an example of a multiple regression, with the predictor variables in X and dependent variable in y.

T-tests work well for two group comparison, for multiple groups one needs to use ANOVA.

Unlike t-tests which compare only two means, ANOVA looks at several groups within a population to produce one score and one significance value. A t-test will tell you if there is a significant variation between two groups. We use ANOVA when the population is split in more than two groups.

The F-statistic in one-way ANOVA is a tool to help you answer the question “Is the variance between the means of two populations significantly different?”

This will group by the group_by_column_df the data frame containing all the samples and will output the pairwise comparison. The Reject column will tell us whether the difference in the mean between the groups is statistically significant.

For two-way ANOVA, we split the population in classes based on two categorical variables (e.g. gender and age over 35). Two-way ANOVA brings 3 null hypotheses which are tested all at once:

Lasso and Ridge regression add a penalization term to the loss function (the objective function to be minimized by the regression algorithm). The difference in the two is that Lasso adds a sum of the absolute values of the regression coefficients while Ridge adds the sum of their squares. The parameter for the regression is called lambda.

The Lasso additional term is called L1 regularization while for the Ridge it is called L2 regularization. For a given regression, both L1 and L2 can be applied simultaneously, in a method called ElasticNet.

The idea for both is to shrink coefficients in order to minimize overfitting. Lasso regression allows for automatic removal of some features during the minimization process. This is not true for the Ridge regression which preserves all coefficients but in a shrunk form. Both aims to reduce the effort put in model selection and allow for more explanatory variables in the regression equation, even in the case of multicollinearity.

Regularization puts constraints on the size of the coefficients associated with each predictor. The constraint will depend on the magnitude of each variable. It is therefore necessary to center and reduce, or standardize, the predictor variables. OneHot-encoded variables should be scaled so the penalization is fairly applied to all coefficients. However, you then lose the straightforward interpretability of your coefficients. If you don’t, your variables are not on an even playing field. You are essentially tipping the scales in favor of your continuous variables (most likely). So, if your primary goal is model selection then this is an egregious error. (From https://stats.stackexchange.com/questions/69568/whether-to-rescale-indicator-binary-dummy-predictors-for-lasso)

An example below. In the first snippet we do data preparation - dummy variable encoding and standardization: 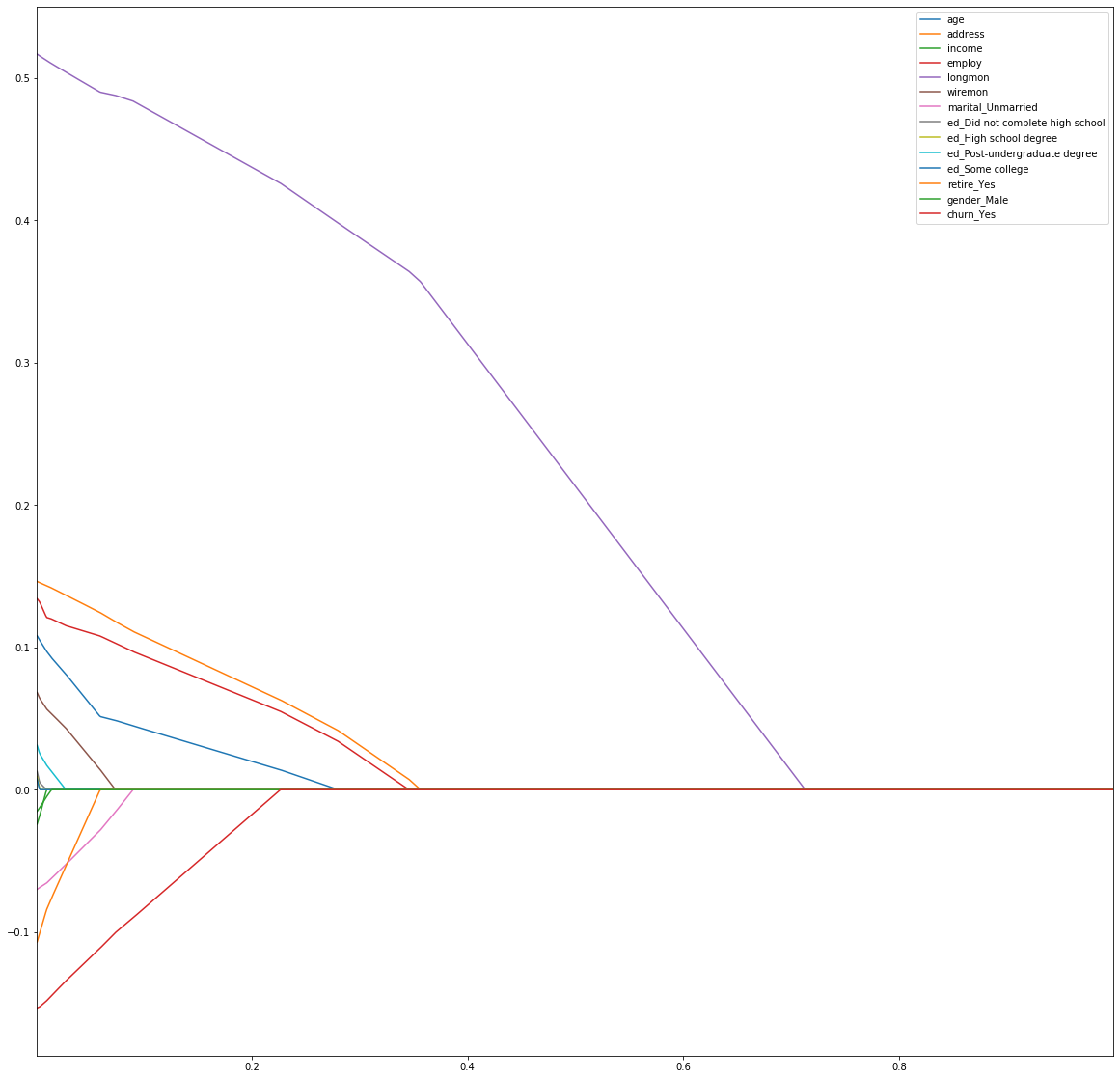 Before finishing, here is how to automatically compute the lambda regularization parameter by using the Akaike Information Criterion and then by employing Cross Validation.

In a future post I will write more about feature selection for Machine Learning.

In case the Y variable is transformed through a logarithm, determining the values for untransformed Y is not that straight forward and it requires further analysis of the residuals: