While linear regression is about predicting effects given a set of causes, logistic regression predicts the probability of certain effects. This way, its main applications are classification and forecasting. Logistic regression helps find how probabilities are changed by our actions or by various changes in the factors included in the regression.

The problem we want to solve is: given a vector of factors X=[X1 ... Xn], find a model that predicts the probability of a binary outcome to occur, P(X, outcome = 1). The input for the model are the previous observations of X and whether the expected outcome was 0 or 1.

One can obviosly try to reduce the problem directly to a linear regression problem, as exemplified in the PDF file here but the shortcomings are immediately apparent: 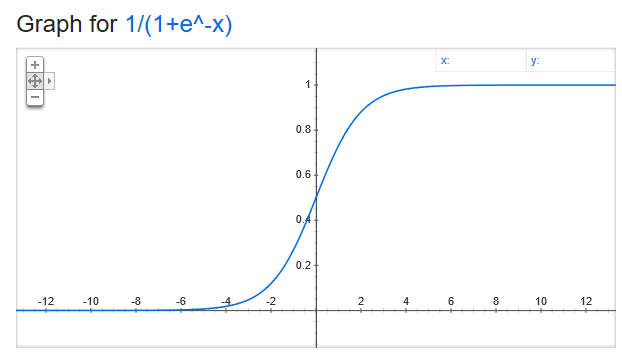 And the wikipedia link: Logistic function

This is a fancy way of describing a table with n colums defined by X, the regression factors, and 1 column defined by Y, the observed result, with k rows.

The core of the model is assuming that the probability of Y being 1 is given by the logistic function:

So, in compact form:

We conclude that P(yi | X) is another column, that of probabilities, but we cannot fully compute it because we are missing the vector B.

But since we only aim to model the real world, we are happy if this product is merely maximized by our estimated probability function (logistic) with B plugged in. That is,

which is equivalent to

Now we can use gradient descent to find the vector B. Unfortunately this method might be slow for large datasets because, for every incremental change in any B, all the exponentials and the logarithms for each line in the dataset need to be recomputed.

Implementation in Excel on the Iris dataset 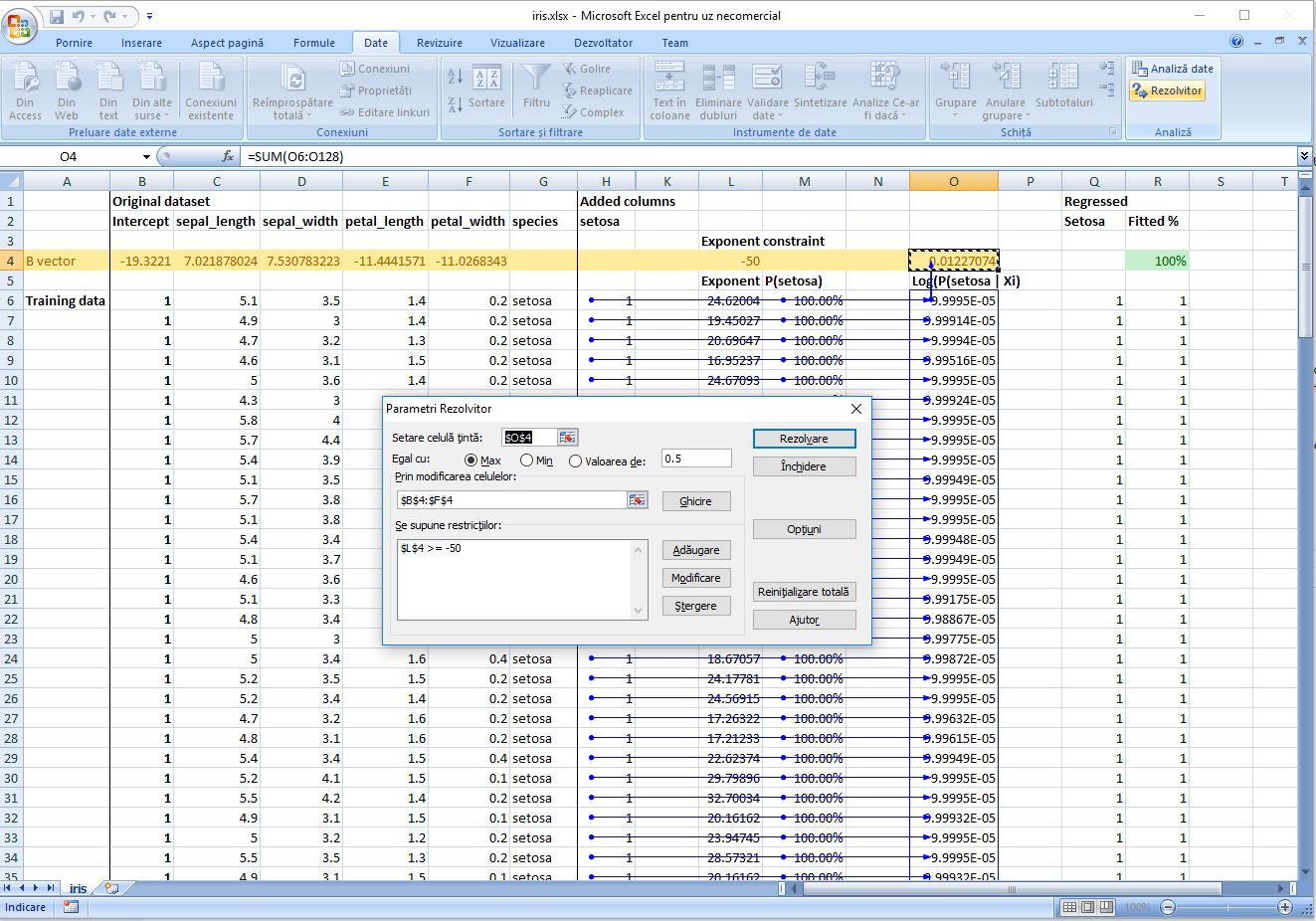 Performing the same steps for virginica leads also to very good results, while for versicolor the results are barely above random choice.

In the second iteration of the file, I have modified the regression so that it operates on standardized factors. This way, we can interpret the coefficients and see which factor contributes the most for classification. The picture below also contains the log(odds) vs most important factor chart, sorted by odds = P(1) / P(0), the ratio between the probability of 1 and 0. This is also a reminder that data for logistic regression should pe pepared in a similar manner to that for linear regression. 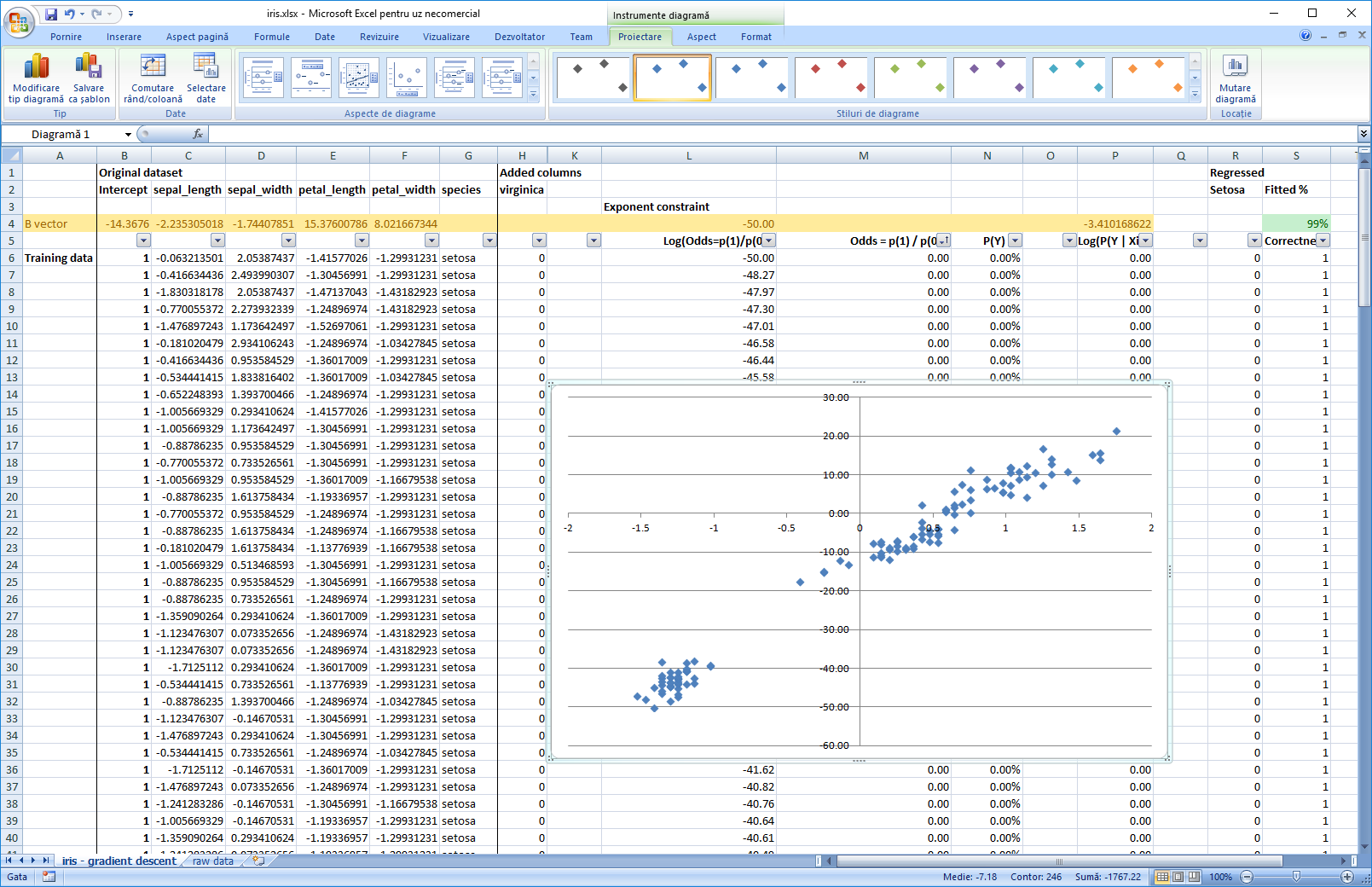 By the choice for the logistic function, p = 1 / (1+EXP(-SUMPROD(Beta, X))), with Beta the coefficients for each of the factors X included in the regression, including the intercept, Logistic Regression hints stongly towards the linear regression.

This function, ln(Odds(p)) = ln(p/1-p), called the logit function, maps the probability space [0,1] to a linear space [-inf, inf] in which we can do the regression. 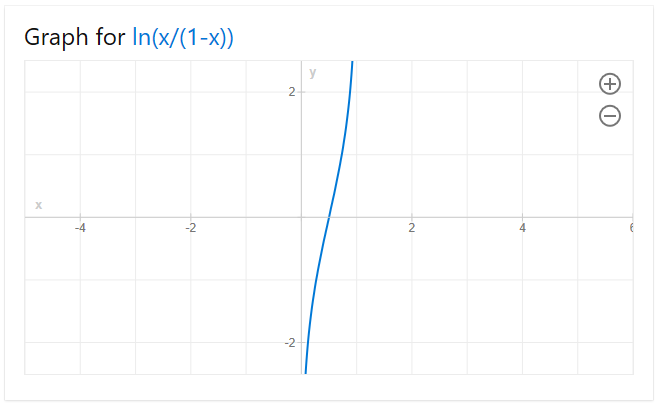 In order to use linear regression to compute the probabilities and thus build our classifier, we need in our input data probabilities as well. The Iris dataset, as presented above, has only 0 and 1 inputs, so we need to collapse it to intervals on which meaninful probabilities can be computed.

In this example we will use another dataset which is already collapsed:

The data is described as follows:

Linear regression on the raw, unprocessed, original data, just to have a benchmark

If we include an intercept, the intercept will reflect the amount of men included in the test, so, for a single man, the results for the prediction will be completely off. We will see that these results are pretty close to what we will obtain from logistic regression, because the probabilities themselves are in the lower part of the spectrum, where the logistic regression itself is quite linear. However, we expect that, as the risk factors increase significantly, for instance by codifying a “heavy smoker” or a “highly obese”, the results from the linear regression to diverge from the real probabilities.

Please see how the variables for smoking, obese and snoring are codified. We want them to affect the slope of the regression, not the intercept.

We will do two types of logistic regression - one that does not account for the amount of men included in the sample and one which does. The problem with not ballancing the regression for the amount of men is equivalent to discarding the precision of the initial estimation of probability given by the sample (no of hypertensives / no of men). E.g., the more men we include, the more confident one can be that the expected value of the sample is closer to the actual expected value of the population.

First step for both regression is to remove from the regression the line where only 2 men are counted. This line does not contain enough information to be able to codify a probability out of it or, better said, the margin of error is too high.

The second step, also for both regressions, is to add the following columns:

As result, we have:

First run, the results without taking into consideration the sample size: Logistic Regression

The second time we took into consideration the sample size by weightning the square of the residuals with the sample size when computing the square sum of the residuals we want to minimize. This is equivalent to having 1 row in the regression for each men that was considered in the regression. We see that this also minimizes the sum of the square standard scores, meaning that the results are now closer to the reality that was observed in the field. As a side note, I tried computing the Bs by minimizing directly the sum of the square standard scores and the results were very close to the ones predicted by the logistic regression. Weighted Logistic Regression

Using of linear regression to determe the coefficients for Iris dataset

In order to use linear regression to determine the coefficients, the data needs to be binned, put in a form from which we can extract probabilities. For the Iris dataset, I did this with the following Python script:

The predictor rows contain the middle of the group range for that particular bin, which does not reflect the actual mean of the data inside the bin. This is highly sensitive to outliers and thus a bad choice. A better way would have been to first split each predictor in equal-sized groups, compute the median for each group, and then use this number as part of the index for each bin.

When we compute the odds and log(odds) to use in the regression we notice 3 possible error scenarios:

Neither of the two last scenarios account for a usable probability, but we have enough data in those bins to draw a conclusion that we cannot simply discard. I used two approaches and the results for the regression were very similar:

Results for the regression at a 0.5 threshold were not as good as with direct maximization of the log-of-probabilities, but rasing the threshhold at 0.8 leads to perfect prediction. Picture below:

We used logistic regression to build a clasifier on the Iris dataset and to predict the probability of a person having hypertension given a set of predictors. We used two ways to compute the regression coefficients: one by maximizing directly a probability function using the gradient descent, the other by applying linear regression to the log-odds function and then computing the probabilities from it. The third example was to process the Iris dataset used in the first regression and to compute the coefficients in a similar manner to that used for determining hypertensives.

If we set the classification decision to 1 when p(1) > 0.5, given the equation of the logistic function, it is equivalent to saying y = b0 + ... bn*xn > 0. This is the equation of a line which divides the factor space in two sections.

The beauty of logistic regression is that the decision boundary can be visualised by just comparing the regression term to 0, since we know that in that particular point P=1/(1+e^0) = 0.5