This post is about dimensionality reduction. It starts with PCA, a method for finding a set of axes (dimensions) along which to perform regression such that the most relevant information in data is preserved, while multicollinearity is avoided. It then applies PCA and K-Means to a dataset of Premier League player performances, in order to obtain relevant groupings despite randomness in data.

PCA is mathematical optimization problem. It aims to find the direction line along which the distance between projected data points is the greatest, that is it has the largest variance. We choose this direction because the largest amount of information about the value of each point is preserved in this projection. The second principal component is an axis perpendicular to the first axis and so on, for multi-dimensional coordinate spaces. This choice of axes not only preserves the most amount of information, but also avoids multicollinearity, as the principal components are always perpendicular to each other.

The problem can be rephrased as: given a set of highly correlated factors, [X1 ... Xn], find a equal number of factors, [F1 ... Fn], completely uncorrelated to each other, sorted so that Var(F1) > ... > Var(Fn), on which we are able to describe our regression problem as Y = A + B1 * F1 + ... Bn * Fn. These factors satisfy the equality Var(F) == Var(X), meaning we don’t lose information when we do the decomposition along these new axes.

It is important to notice the inequality, ``Var(F1) > … > Var(Fn)`. The higher the variance along that particular axis, the more information is contained in that axis..

The linear algebra problem that helps us find these factors is called eigenvalue decomposition and can be phrased as:

Principal component F2 = b1(X1 - F1) + ... + bn(Xn - F1) is subject to the same constraints. Like this, we have defined a recurrent problem which allows us to find all Fn components.

Results from this decomposition are:

Now, dividing each eigenvalue ei=Var(Fi) to the total variance of F, Var(F) = Var(F1) + ... Var(Fn) since Covar(Fi, Fj) = 0, we obtain a vector v with sum(vi) = 1. The plot of this vector is called scree plot and shows how much each factor contributes to explaining the variance of the original data. This is the most important decision tool for us to decide which factors we keep in our analysis.

The following Python code uses the power method together with deflation for computing the eigenvectors and eigenvalues for a square matrix A.

The correctness is very simple to check. Just do the following:

Let’s setup a test bed of linear-dependent variables. We will want to predict Y based on A - see below:

Let’s compute the covariance of and correlation of the two vectors, a and b:

Eigenvalue decomposition is applied to the covariance matrix. So let’s do just that:

We can quickly check that the two v's are perpendicular to each other, by doing

Now we can call the following function which computes the principal factors (vector F described in the PCA section) based on the initial matrix A and the eigenvalues vector v.

This also shows that the fist factor contributes 98% to the total variance, so we can use it alone in regression. 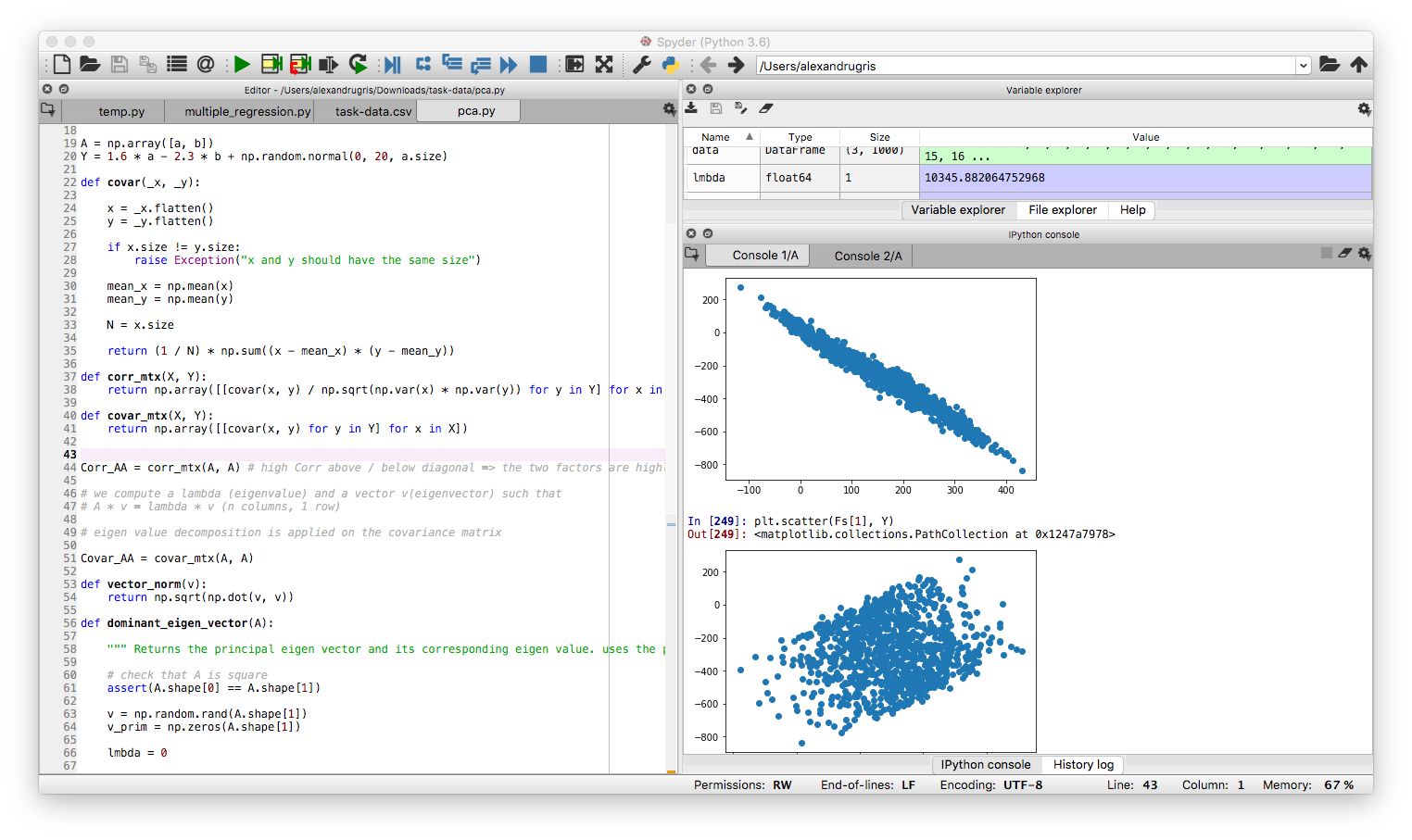 If we end up with the principal F factor explaining less of the variance any of the X initial factors, we must standardize our data. For our A matrix, the matrix of all X factors, the function is as follows:

We check this need by calculating the R^2 metric for each regression (RSQ in Excel) - for the X factors and then for the F factors. Now we can safely use the covariance matrix to do PCA.

However, there are more points to consider:

The argument against automatically using correlation matrices is that it is quite a brutal way of standardizing your data. The problem with automatically using the covariance matrix, which is very apparent with that heptathalon data, is that the variables with the highest variance will dominate the first principal component (the variance maximizing property).

So basically, just like a space transform in a 3D space, by multiplying the observed data with the coordinate system which describes best its covariance / correlation, we bring that data into the coordinate space where each axis represent, in decreasing order, its highest variation. Matrix multiplication is simply a linear (coordinate space) transformation.

We are going to use the datasets downloaded from here. The purpose of the example is to group players in similar clusters, so that we can use them to enrich scarce data. That is, we know that players don’t score in every match and that there are relatively few matches in a season. We want to group players by similarity in order to obtain a better (enriched) model for player to score probability. These clusters could further be used to predict other measures like team-expected-goals or to predict player relevance in a certain team. Obviously, this is not a fully developed model, it is intended just to show how these two techniques can be used together.

For the actual clustering we will use KMeans. However, KMeans is not suited to dummy data, not even z-scored, and it is even worse if the counts are not balanced.

There are latent correlations within the data as well. These correlations tend to increase the importance of certain features as well as pollute the distance metric, leading to less relevant clustering. Therefore, we will use PCA to reduce this dimensionality, as well as decrease the errors in the distance function introduced by the dummy variables.

This is how the data looks after preprocessing: 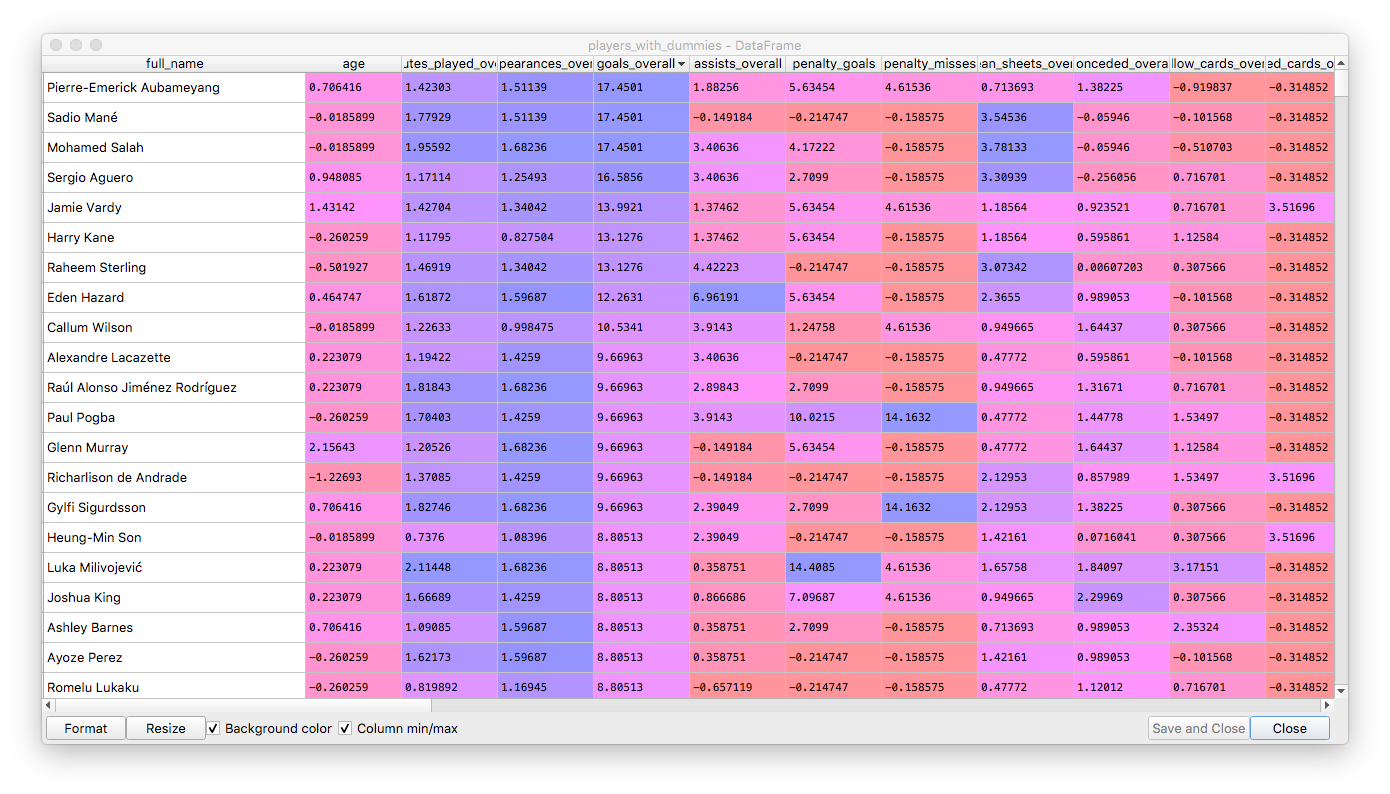 Now we are going to use PCA with a relatively low explained variance threshold, so that data is smoothed out and we only keep the most relevant features.

We see in the picture below the explained variance of 75% as well as the reduction of features from 35 to 17. 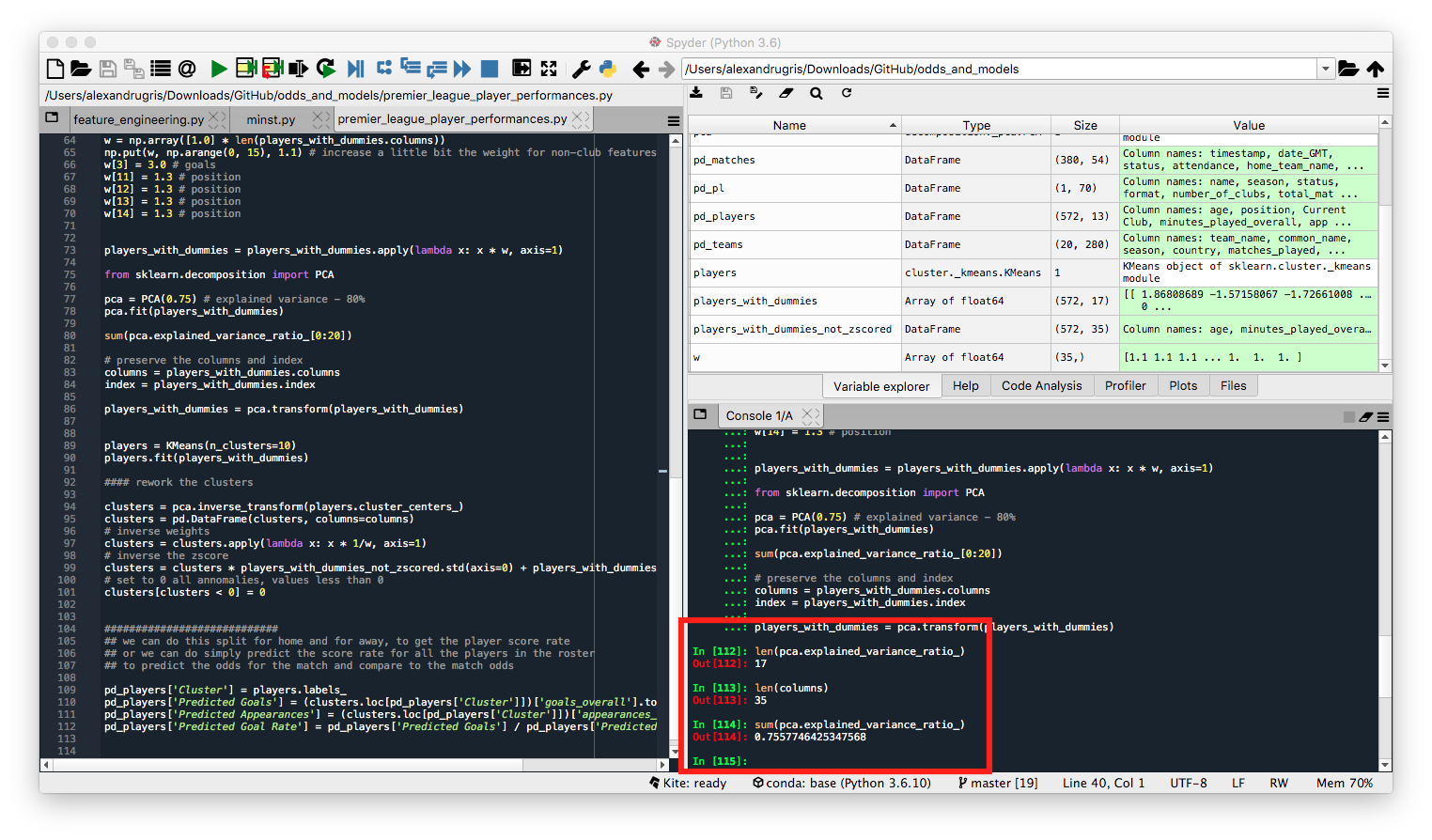 Now we are going to perform clustering on the reduced feature set, as well as transform back the cluster values from the PCA features to the original features.

The centers of our clusters:

And each player assigned to its cluster, with predicted goals for the season:

Our players sorted descending by the number of goals, showing the correlation with the predicted goals from the cluster: 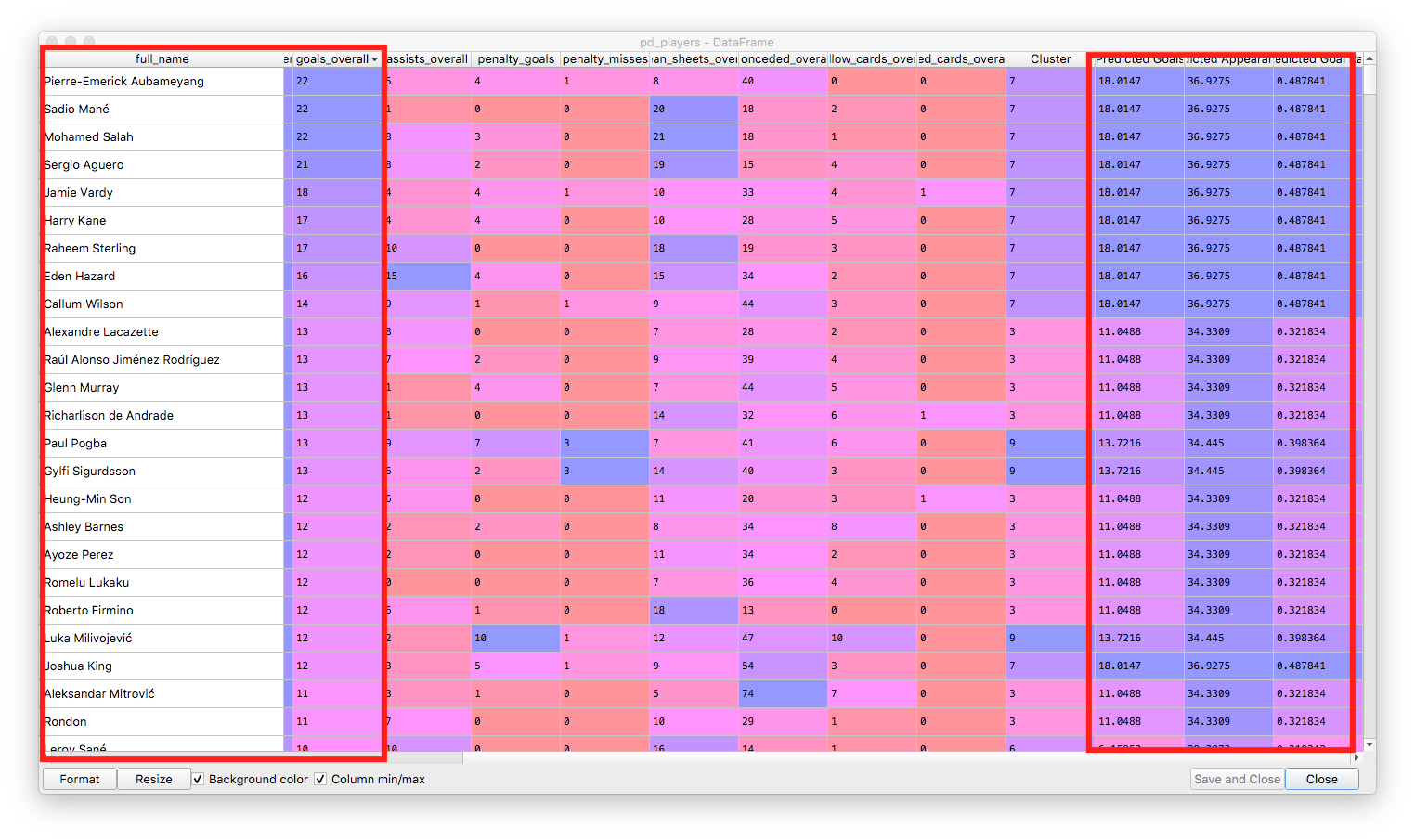 The technique above is far from perfect, but it does show some relevant groups of players and could be used further as a feature in a regression or to predict the performance of teams of players.