In several of my previous posts I wrote about linear regression, but in none I wrote about when and how to use it correctly and how to interpret the results. Computing a simple regression line is easy, but applying it blindly will surely lead to incorrect results.

In order to check that a linear regression model is correct, we need to examine the residuals. These residuals need to have the following properties:

Let’s look now at the residuals: 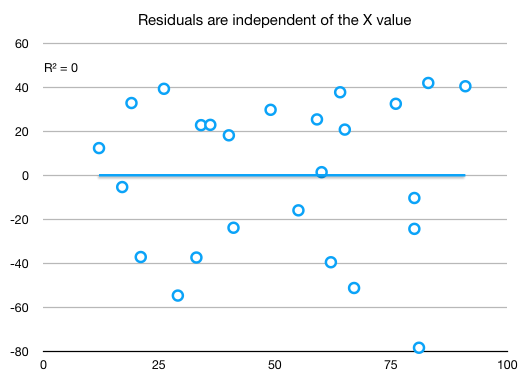 and the regression line 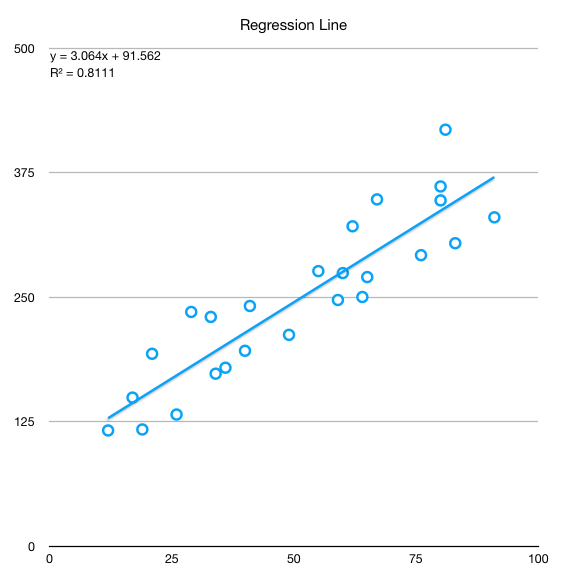 A not so good regression example

Let’s consider now the same X as before, but this time Y defined in a square relationship to Y. We apply the regression steps described before and we obtain:

When we inspect the scatter plot of residuals vs X we see a pattern where should be none: 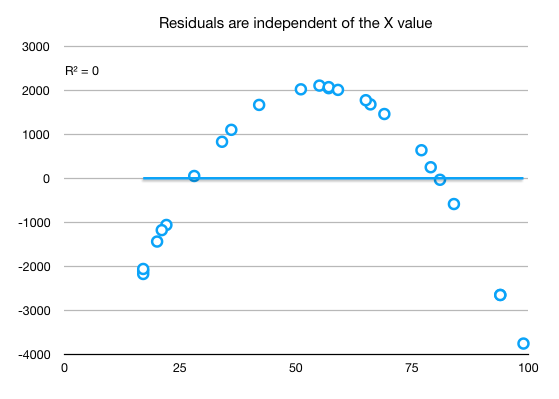 And the regression line showing also that the linear relationship does not properly capture the data: 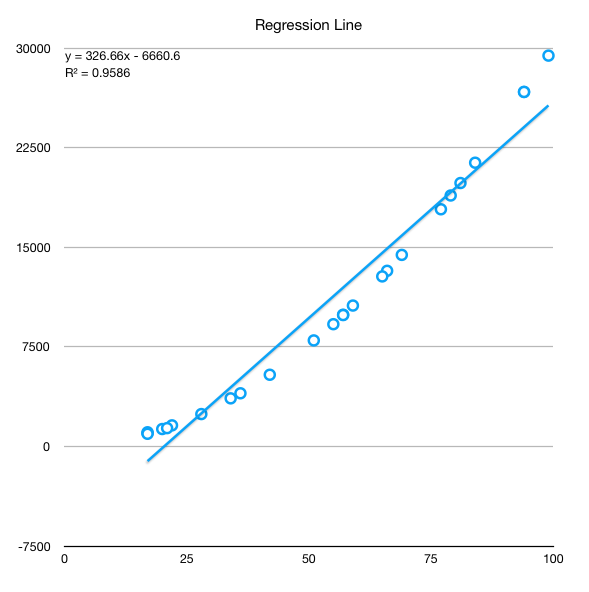 When we have a series that has an underlying pattern, we need to deflate the series in order to bring the residuals as close as possible to their desired properties. Usually, a series that has an underlying pattern exhibits large variations towards its ends. Examples of such series is price evolution of stocks which need to be deflated by the inflation, prices vs demand, any time series as they usually tend to follow either periodic patterns or exhibit some kind of growth or both. If we don’t want to (or can’t) find such underlying patterns, the most simple general method of deflating the series with good results is switching to percentage returns. These can be calculated by one of the following formulas:

For small variations, up to 20%, the two formulas give almost identical results due to the mathematical properties of the natural logarithm. For higher variation, the logarithm shows excessive dampening of the values. See the chart below for %returns for a series computed through both methods. 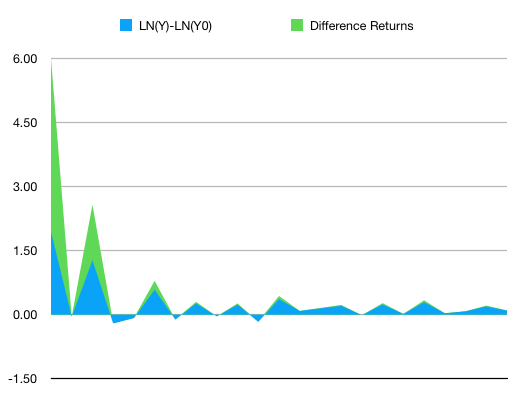 Better than mine explanations here:

Logging a series often has an effect very similar to deflating: it straightens out exponential growth patterns and reduces heteroscedasticity (i.e., stabilizes variance). Logging is therefore a “poor man’s deflator” which does not require any external data (or any head-scratching about which price index to use). Logging is not exactly the same as deflating–it does not eliminate an upward trend in the data–but it can straighten the trend out so that it can be better fitted by a linear model.  Deflation by itself will not straighten out an exponential growth curve if the growth is partly real and only partly due to inflation.

Going back to the regression

We will use logging in this example. Steps below: 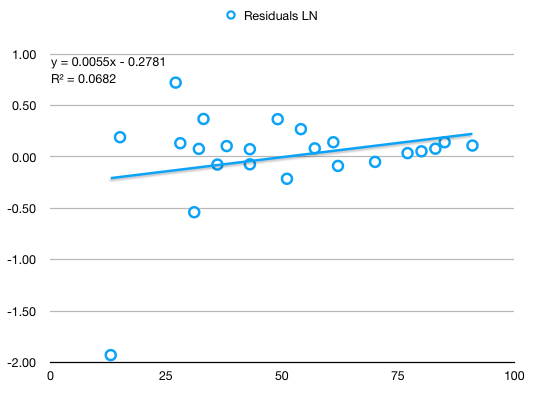 Reverting to initial scale (before the percentage returns transformation), residuals show a tendency to accumulate errors towards the right extreme.

Plots of originally observed Y vs X and regressed Y vs X show good capture of the fundamental X^2 coefficient as well as a good fit: 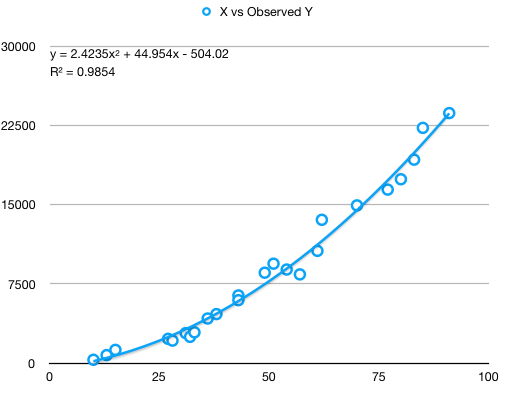 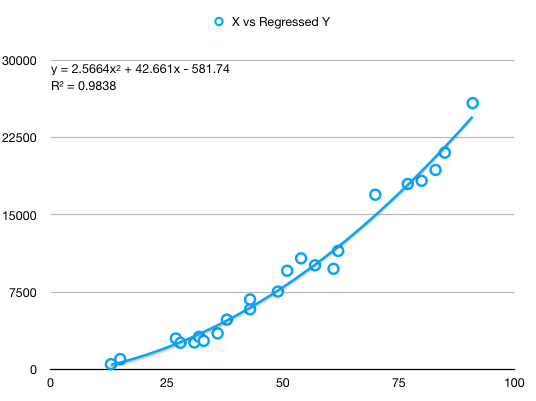 And finally, observed Y vs Y regressed show a strong linear relatinon of slope almost 1, but with visibly increasing errors towards the right extreme: 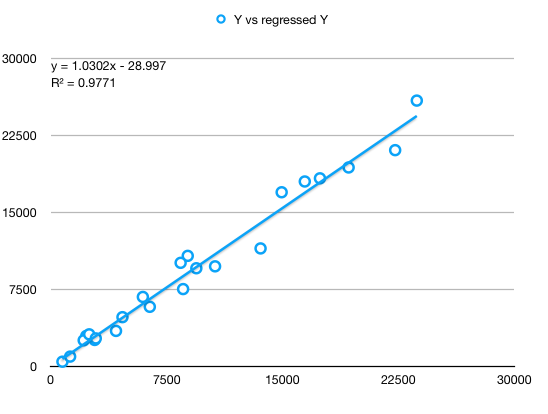 In Excel, the function to perform multiple linear regression in LINEST - attention, the returned coefficients are in reversed order.

Things to check for in a multiple linear regression:

Here is how to compute adjusted R^2 for a multiple regression:

We may not want the slope influence to be reflected, but only the intercept. In this case, we would only add a single binary dummy variable.

We can generalize this to k categories. To avoid multicollinearity, we will introduce k-1 dummy variables for intercept and k-1 for slope, if we want to consider slope as well.

Now, what we have is a coefficient ci for each of the factors. The question is, is each of these factors relevant? Differently said, if ci == 0, that factor would be irrelevant. Now we need to see if ci == 0 is probable enough so that it cannot be discarded that is, if the ci for the whole population would actually be 0 (null hypothesis), how probable would it be for us to observe the value obtained from performing the regression?

To answer the question above we compute what is called the t-statistic. t-statistic(ci) = ci / SE(ci). The t-statistic measures how many standard errors we are away from the mean if the mean were 0, that is if the ci coefficient for the entire population were 0.

Here is an example on how to compute the SE:

From this we extract the following rule of thumb:

The value of each coefficient divided by its standard error should ideally be greater than 3. If the ratio slips below 1, we should remove the variable from the regression. Wikipedia 1 and Wikipedia 2

From the t-statistic we compute the p-value, which quantifies the probability that we obtain for ci a value greater or equal to what we obtained through regression, provided that ci were actually 0. That means, we look for a very low p-value which corresponds to a high t-statistic in order to determine the relevance of this particular factor in the model. Equivalent to a t-statistic of 3 is a p-value of roughly 0.05% (3 deviations from the mean, two-sided p-value).

How good, overall, is our model? That is, if all our regression parameters were 0, how far would our residuals be from residuals that would be generated from an intercept-only model.

The F value in regression is the result of a test where the null hypothesis is that all of the regression coefficients are equal to zero. In other words, the model has no predictive capability. Basically, the f-test compares your model with zero predictor variables (the intercept only model), and decides whether your added coefficients improved the model. If you get a significant result, then whatever coefficients you included in your model improved the model’s fit.

We use the tests before to get which model coefficients are truly relevant for our model. The actual model determined gradually, starting from all features available (usually) and reducing one by one the features which don’t have enough relevance. In the example below we also plot the Akaike Information Criterion (AIC) to show how it evolves while features are gradually pruned.

In Python, another way to perform feature selection is by employing this class from SKLearn. It has options for selecting features for both regression and classification tasks.

I have generated some data to create a regression model here. The data assumes a team of 3 people working on a software module, with 3 types of tasks: front-end, backend and data. As time passes, the complexity of the code base increase thus also estimations tend to increase. The data includes a measure for code complexity, the type of task, initial estimation given by each developer, which developer worked on each task (there is an affinity for developers for task types, but not 100%) and what was the final duration. We want a model which aims to predict the final duration of a new task.

The data is chosen in such a way that it presents multicollinearity and categorical components.

First step is to see if maybe a simple regression based on the average estimation given by developers is enough. We notice than, while the trend in task duration correlates with both average estimation and the code complexity, neither are good predictors - rather low R^2 in both cases as well as two divergent trends in the first chart. Both elements hint towards more factors needed to be included in the regression. 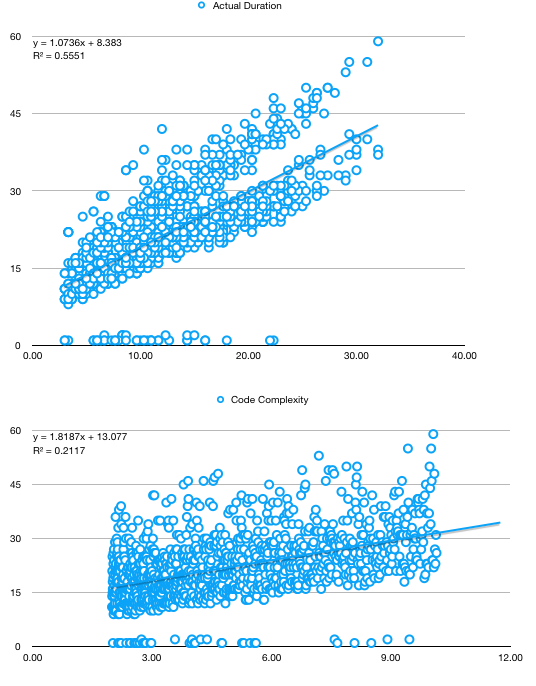 A second step, which we will skip now, is to analyse the duration based solely on time. If we were to do this, we would have to switch to percentage returns to remove the trendiness in data, as explained in a previous section.

The third step is to analyse muticollinearity. When we start scatter-plotting one variable against the other, we notice very strong correlations - note that, for estimations, they are from the start based on Fibonnaci numbers, thus the several parallel lines instead of a cloud of points.

From the multicollinear variables, seems the “Average Estimation” explains the best the variation in duration, thus we will keep it and discard the rest. 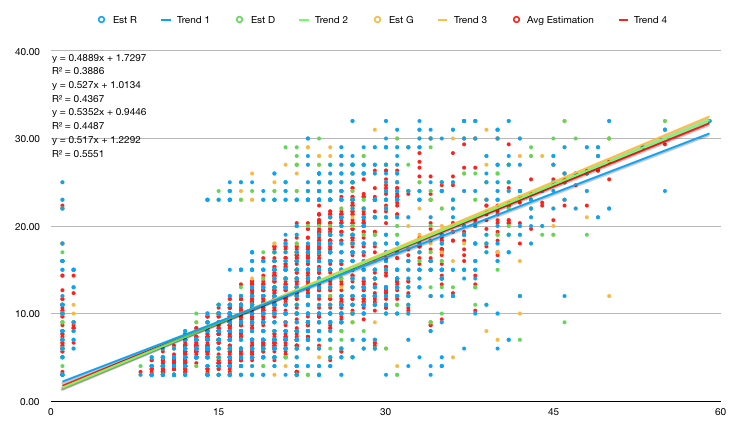 After doing our analysis, we will take into consideration the following factors:

we don’t include also the Worked R, D slope dummy because they highly lag 1 autocorrelate to Frontend task and Backend task.

With the following results: 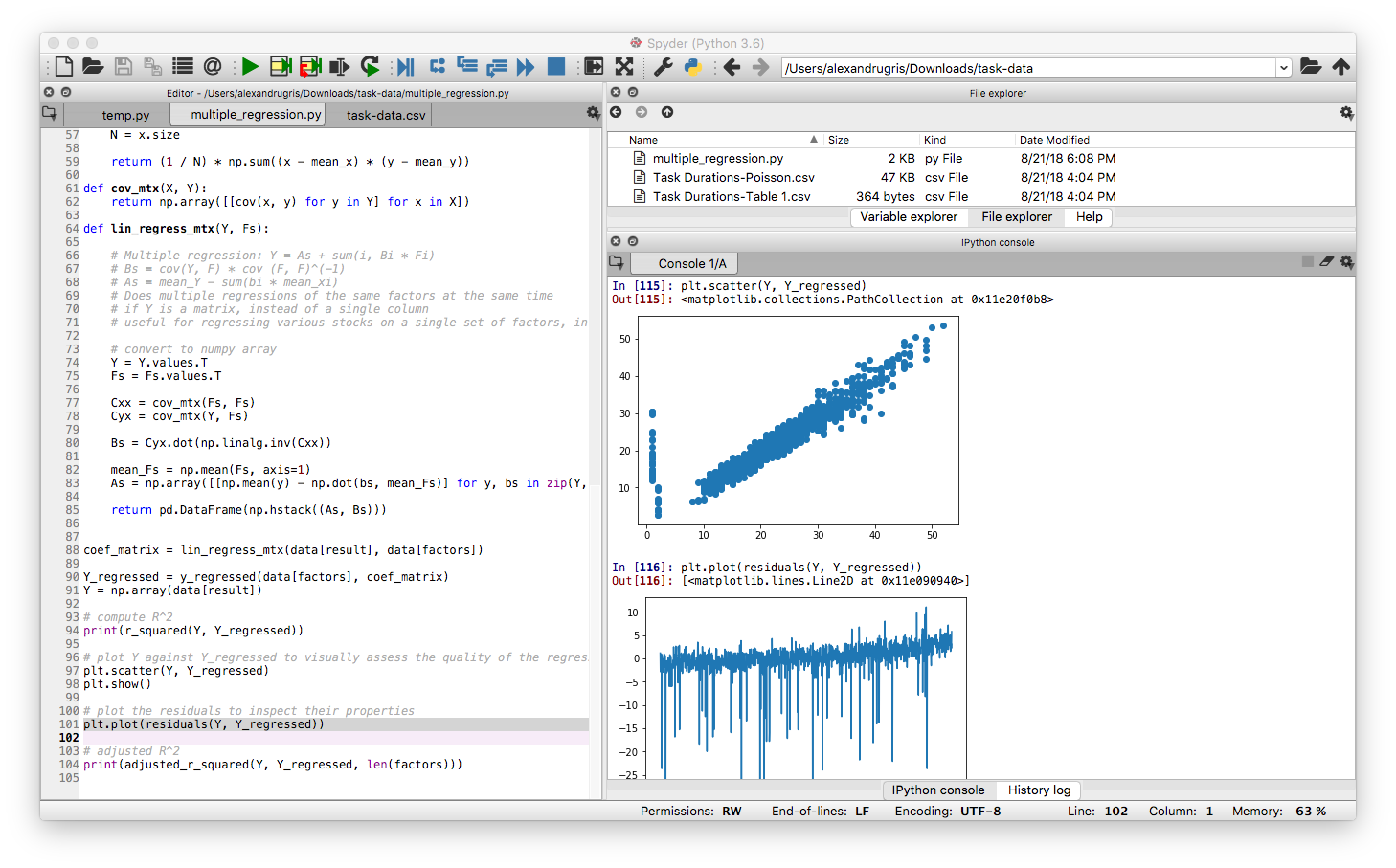 It is obvious that except some outliers the residuals are quite normally distributed. However, they have a trend upwards which should be investigated.

It also is quite obvious that the results of the regression are not far from the observed data. This is numerically highlighted also by the rather high R^2 and adjusted R^2.

Coefficients are a little bit strange though: 17.674954 -0.244873 -1.934692 0.933654 0.383172 -0.031911 -1.19284. A high intercept and a negative correlation with the number of incidents. The number of incidents is selected to be Poisson distributed with a mean of 5, no matter the code complexity. This, together with a high margin of error in the way the Inverse Poisson was computed in Excel which leads to a predisposition towards lower numbers, might be interpreted as “as the code complexity increases, the team becomes less confident in its ability, but still finishes faster than their too pessimistic estimates”. The extra average added by the incidents is included in the intercept, while the predisposition for lower numbers is included in the negative factor for the incidents.

The next steps are:

I am not going to do them now, but add a link to a paper which show how to compute these values: link here