This post attempts to sketch a solution to a problem a bookmaker might have: starting from a predefined set of odds, how do we adjust them so that the risk for the bookmaker is minimized? We take into consideration the financial stakes the bettors have in the game, the total financial risk the house is willing to take and will only analyse the 1x2 market (home-draw-away), to keep the code clean.

We can express the problem in the following bayesian terms: assuming that bettors place bets according to their assessment of the market and that the money they stake is proportional to the confidence they have in a specific outcome, given that a bettor places a specific amount of money on an outcome (event occured), how does this knowledge influence our assessment of the real odds?

Examples of problems that can be solved through Bayesian Inference

Here are some charts for various parameters of alpha and beta: 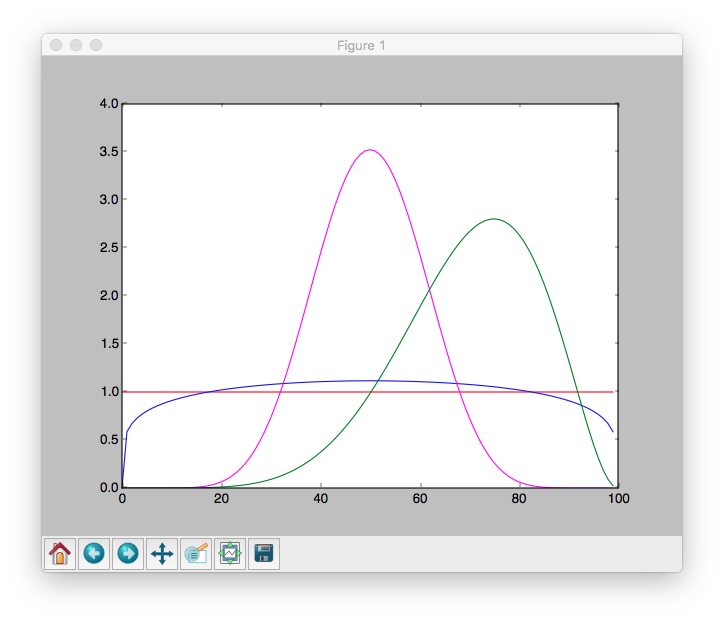 So let’s say we assume a coin toss experiment, with a probability of p for heads to appear. If we don’t want to take a stand on whether the coin is fair, we choose alpha and beta to both equal 1. Or maybe we have a strong belief that it lands heads 55% of the time, and we choose alpha equals 55, beta equals 45. The higher the numbers for alpha and beta are, the tighter the distribution is and a stronger belief we express. When we flip our coin a several times and see h heads and t tails, Bayes’s theorem and additional mathematics tell us that the posterior distribution for p is again a Beta distribution, with adjusted parameters alpha + h and beta + t. We will use this result when we will compute the odds adjustments later in this post, based on the possible returns of a series of bets.

Before getting to odds adjustments, we will solve another problem, but this time through counting. Let’s assume we have a cluster of N players for which we have the results from the last M matches. Another player is classified as similar to these N players, but we only have his results for the last P matches, with P < M*N. What is the expected probability to score for this player?

The problem is interesting because (a) player-to-score is rare event and (b) the number of recent relevant matches a player plays in is rather limited, as his performance changes across seasons, teams etc. Therefore, a way to cluster and then use the cluster information enrich the data is highly recommended. 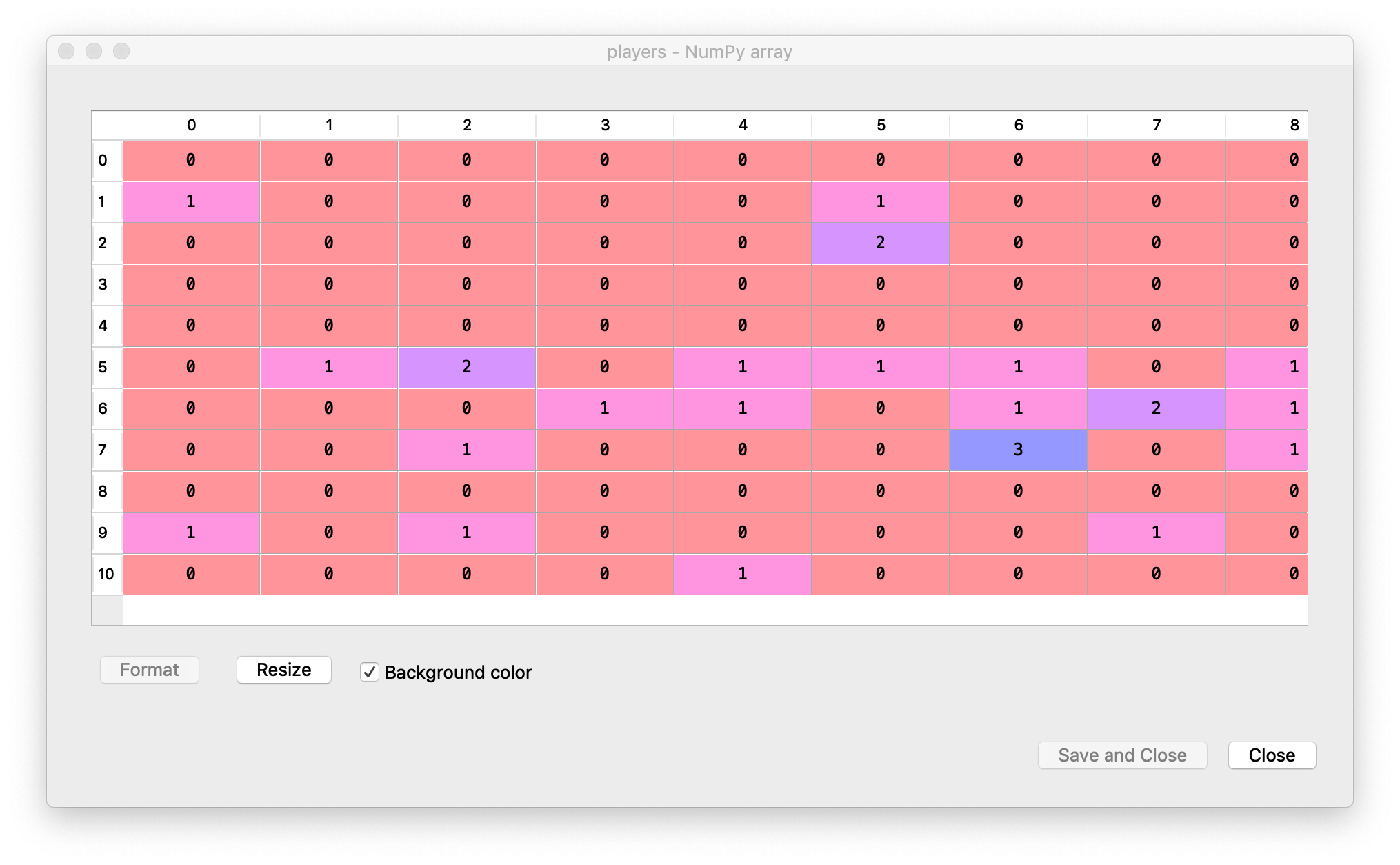 The results of the our player in this context: 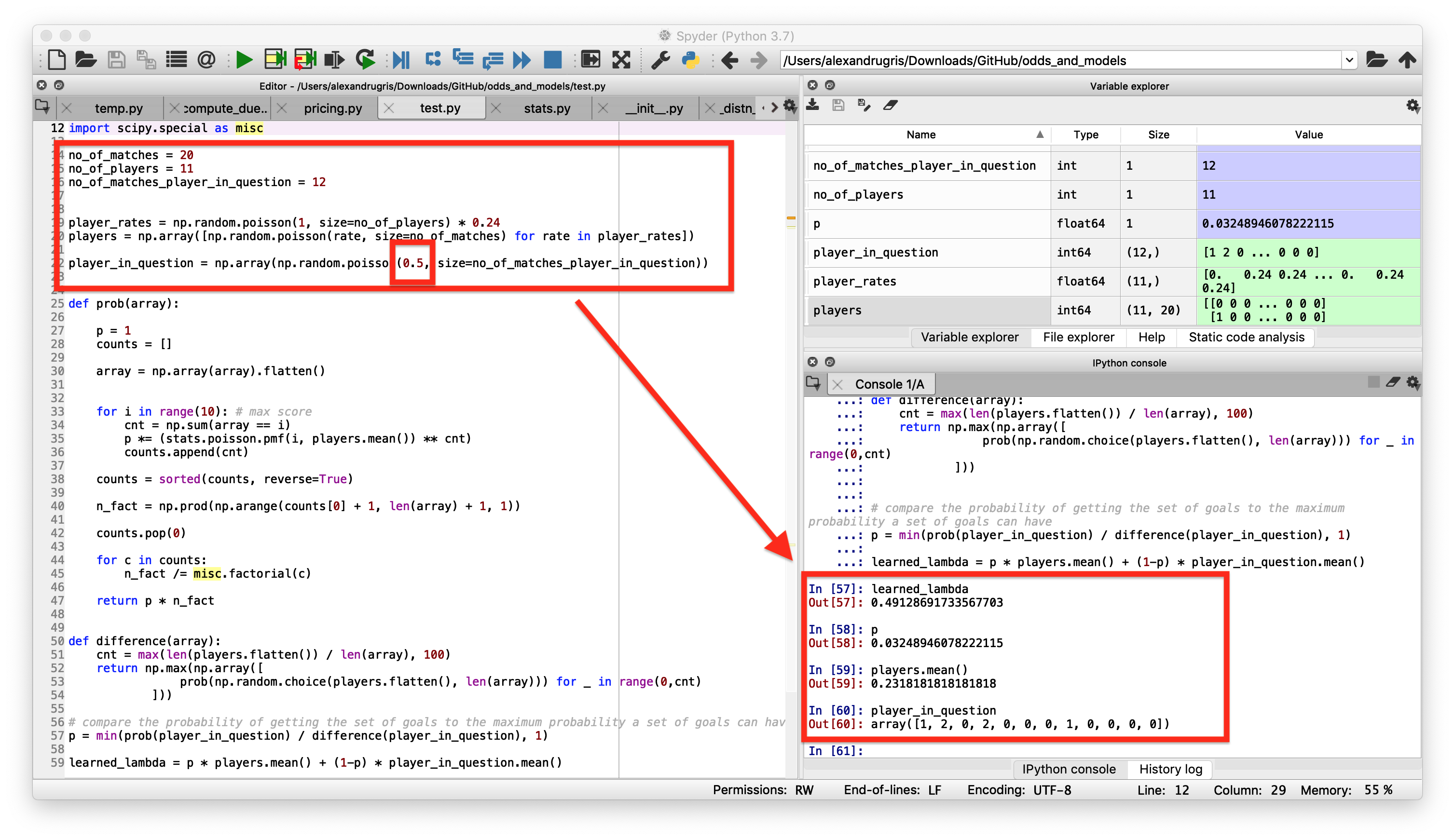 The example above is run with the following parameters:

Running the same simulation on a lower number of matches would give different results. Here are, for instance, the results for only 5 matches for the player in question (p is the probability the result belongs in the cluster):

Below is some sports-specific code used later in the article:

The code and explanations

Please read the code. Much of the explanation for how this works is directly embedded in comments.

To keep the results understandable, I used a test bed composed of 3 types of bet placing strategies:

To run the tests, we considered several initial odds, with a high payout, so that we emulate a real operator risk management as closely as possible and checked if we go bankrupt and how much money do we make.

The code for the simulation is pretty straight forward:

The results are then displayed as a chart, like this:

TODO: look into this: Dirichlet distribution. 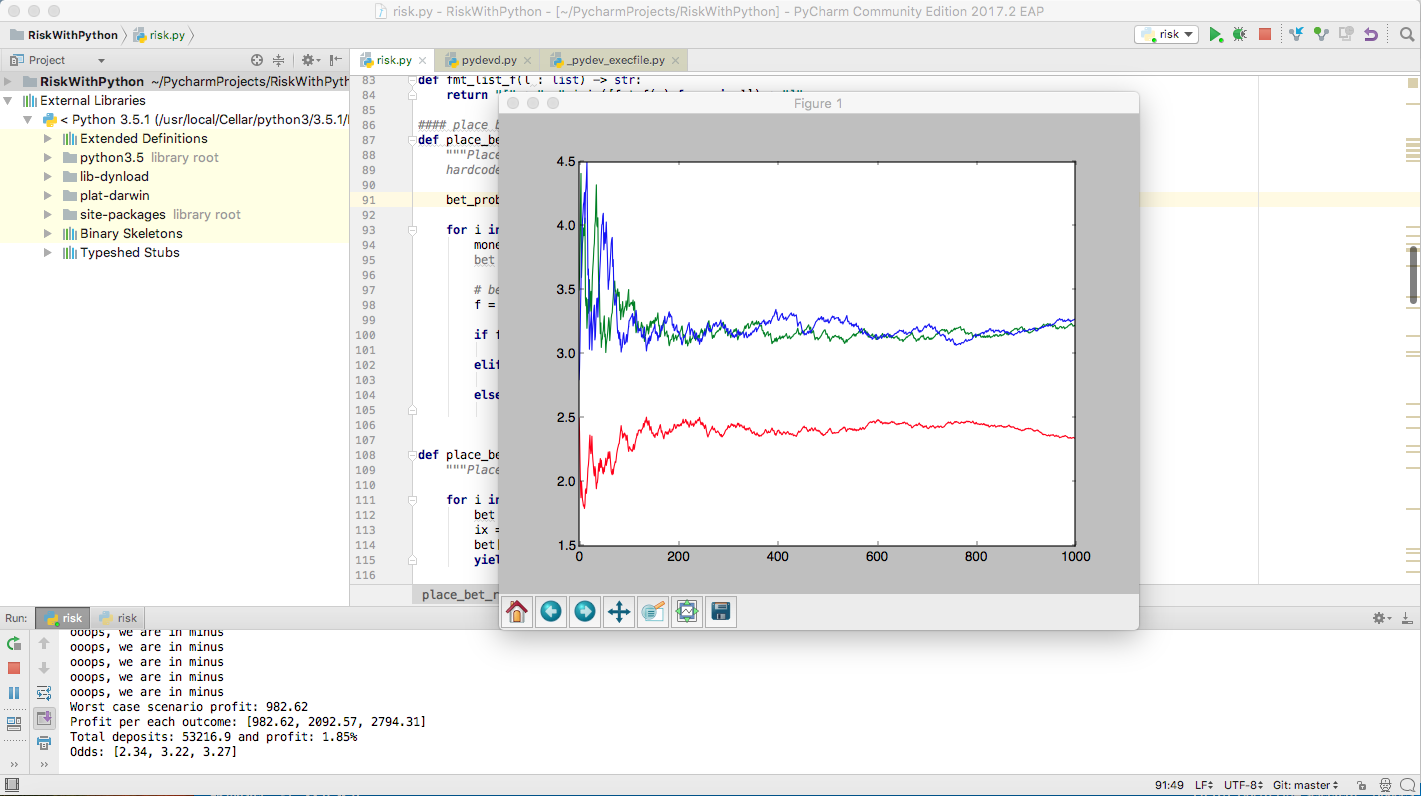 How to interpret the results:

If we run several simulations we notice that, unless the initial offering is completely off-mark and the number of bets are is small, the house wins money on most of the matches. The results are consistent across several runs of the algorithm. Below are the gains for 100 runs, which give: 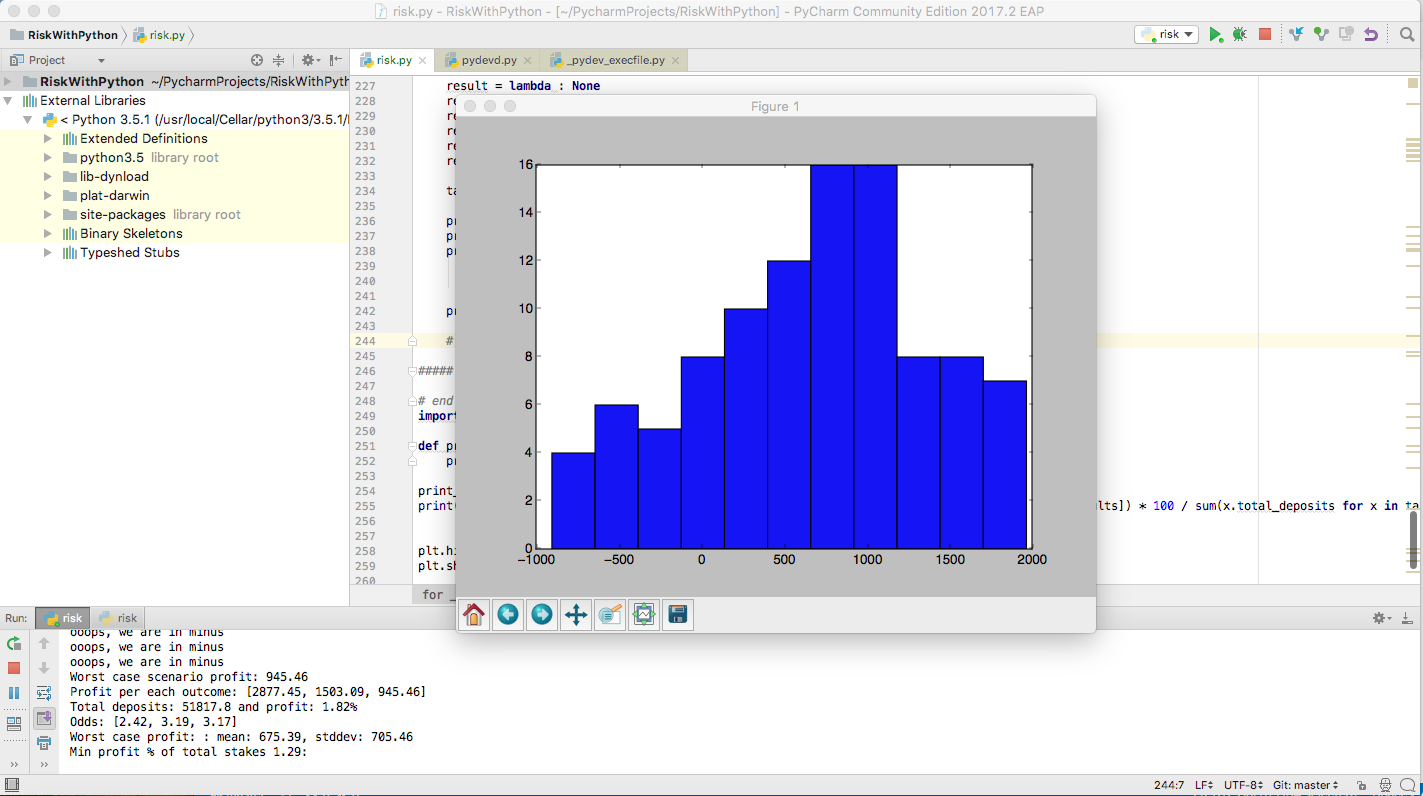 If we consider 10000 bets per match, the results are much more stable and the profit much better even in the worst case: 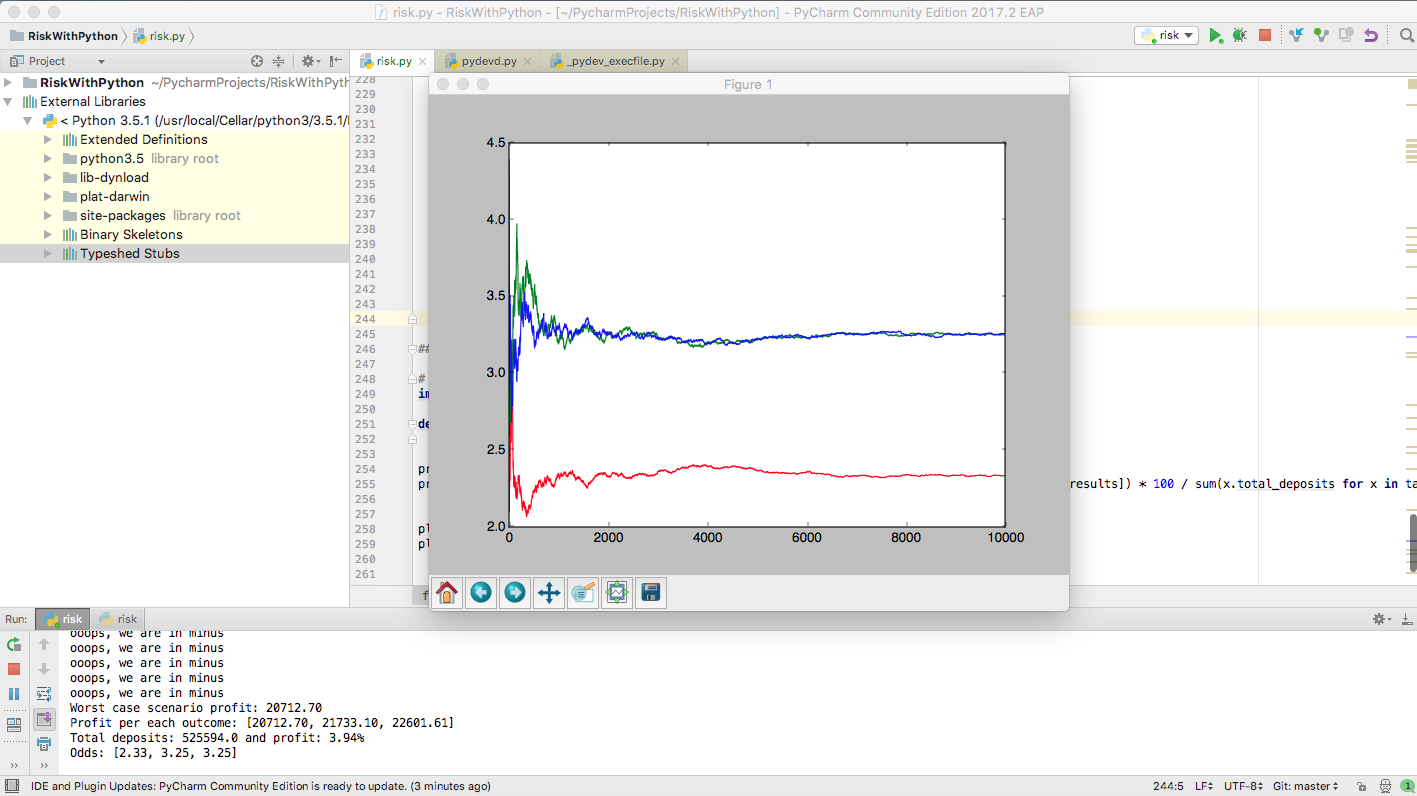