A matrix made of:

The percent of classes classified correctly.

Very high, but obviously the test is bad, as we will see with the following three metrics. The results are completely biased by the true negatives. An example of such a bad test with high accuracy could be ‘you are CEO if your name is Jack’. Obviously, there are a lot of Jacks who are not CEOs.

How accurate our positive predictions are. The percent of predicted 1s that are actually 1s.

Obviously, accuracy is less than 1%.

The percentage of 1s that the model correctly classified.

Again, not such a good score.

The percentage of 0s correctly classified.

The ROC curve captures the tradeoff between specificity and recall (sensitivity). Its axes are X:(1-specificity) and Y: sensitivity. It is drawn by varying the lambda classification threshold for a specific model. It is used to select such a threshold that gives the best ratio of sensitivity and specificity, which is given by choosing a lambda as close as possible to the top - left corner of the chart.

Below an example of plotting the ROC curve and setting the lambda parameter for a logistic regression.

Now, let’s vary the threshold and plot the ROC curve. 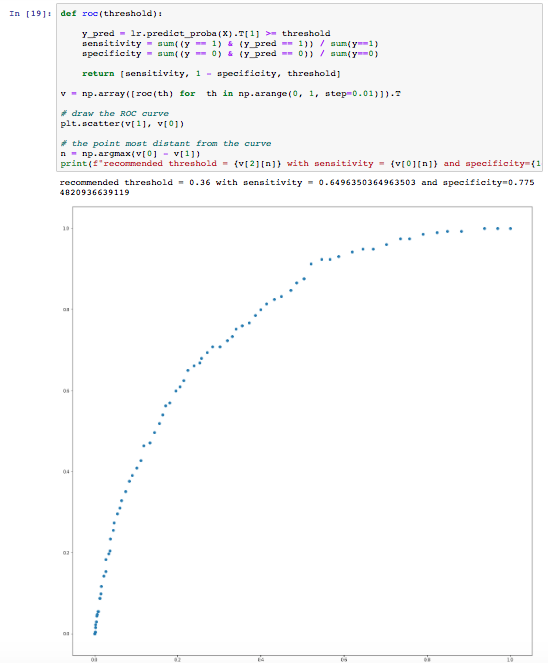 In addition to the ROC curves, it can be very useful to examine the precision-recall curve (PR-curve). These are especially useful for imbalanced outcomes. Below is an example for the precision / recall curve: 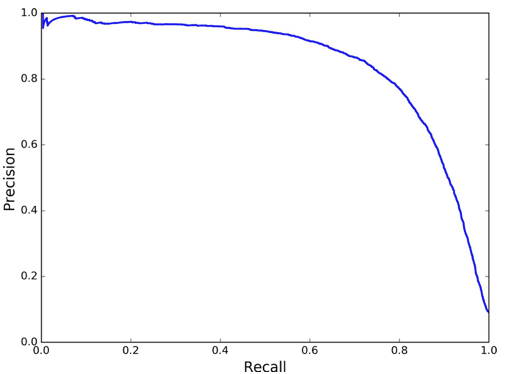 In the example above, precision starts to fall sharply around 80% recall. In this case, we probably want to select a precision/recall tradeoff just before that drop for example, at around 60% recall. A good classifier has a PR-curve which gets closer to the top-right corner.

Imbalanced datasets can lead to a very poor classifier because the underrepresented class might simply be rejected as noise in the training step.

Some ways to deal with imbalanced data are described below:

An Example Of All The Above

Importing the functions we are going to use:

Splitting the dataset in train and test. As good ML engineers, we are going to look further only at the train dataset, and leave the test dataset untouched until the last stages of the project. 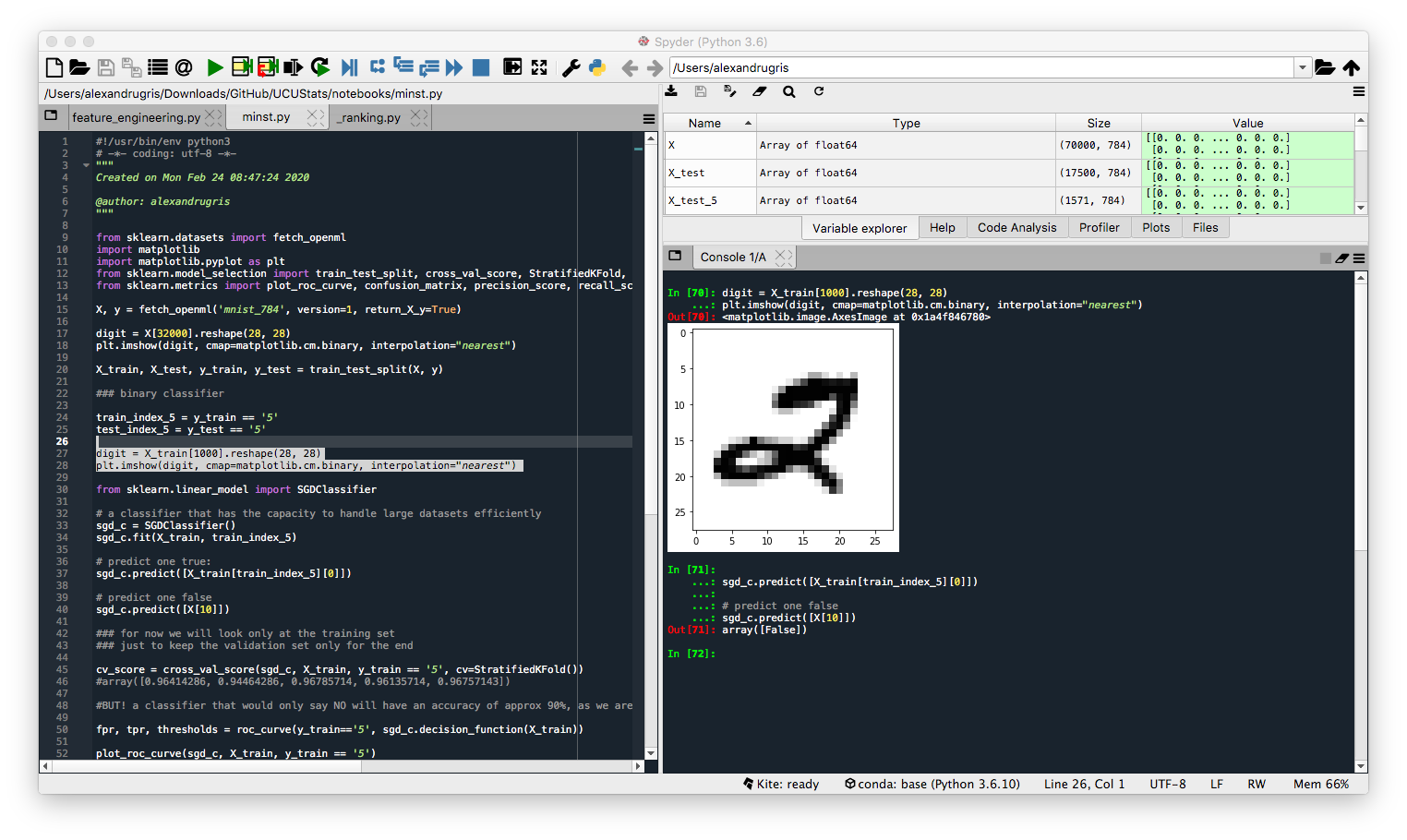 Train a classifier and predict a positive and a negative case, just for testing purposes. Success.

Compute the cross validation score. The results for accuracy seem pretty good. However, this is an imbalanced class, only approx 10% of the digits are 5, which would give a pure False classifier an accuracy of approx 90%. Therefore, the 96% score obtained below is not great.

Now we are going to look at the ROC curve and the Precision Recall curve and compare the two. We will look also at the classification metrics.

The curve looks quite steep, which gives the impression of a good classifier. 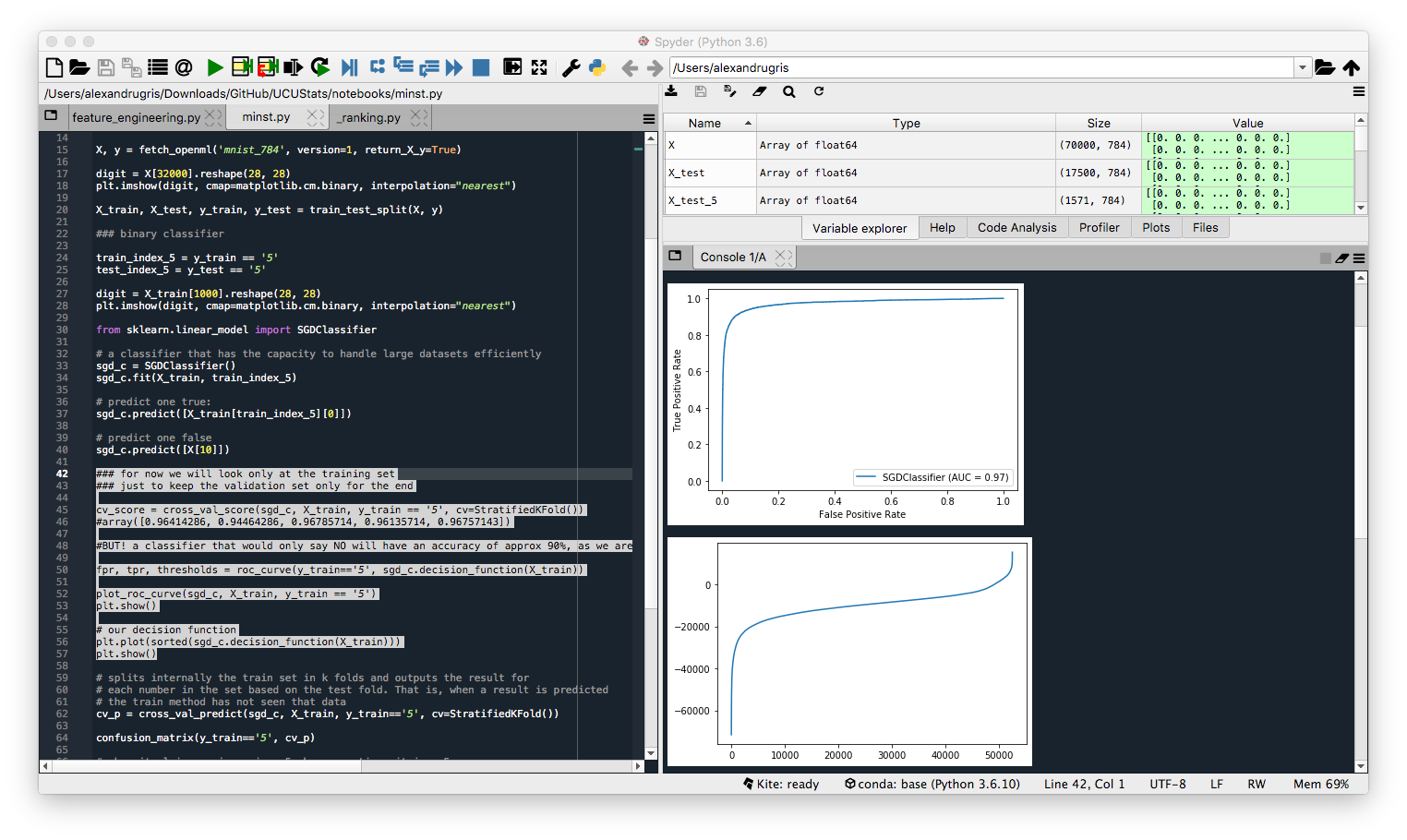 But when we do the same with the precision-recall curve, we see the results are less outstanding. That is because we have a minority class we want to classify and the PR-curve is better suited for it. But before that, let’s look at the cross_val_predict function and then compute the classification metrics described at the beginning of this article.

And finally the precision recall curve and, similarly to the ROC curve, the function to programmatically access the precisions and recalls for each threshold allowing for a manual selection of the classifier decision boundary.

The not so steep Precision-Recall curve: 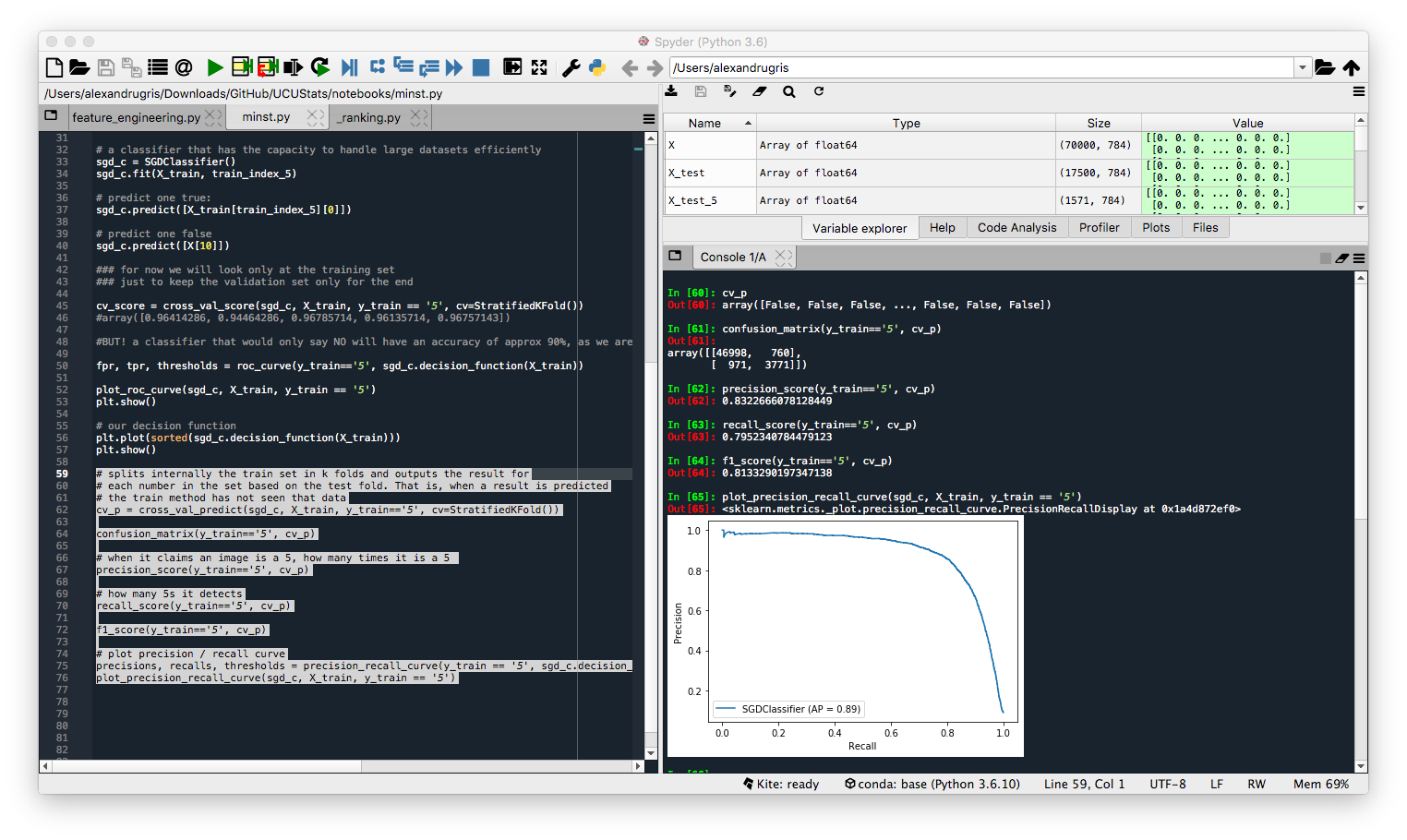