The output is a decision tree which, for a new input vector, X' will predict its class (or the regressed value), Y'. If the problem is one of classification, the label predicted will be the label obtained by the majority vote from the points contained in one of its leafs. If the problem is one of regression, the value predicted will be the average values Yj of the points contained in the un-split set at one of its leafs.

A decision tree is, as the name implies, a tree. Since in the large majority of the cases this tree is binary, we will consider only the binary case in this post.

When parsing the tree, at every node a decision is taken on whether to go right and or left. Each leaf represents the decision to which class that particular path belongs to. In the case of regression trees, it represents the predicted value for the specified set of parameters.

The algorithm works by splitting the nodes based on the value of one of its predictor variables. The algorithm stops usually after some conditions, like the depth of the tree, or the number of leafs, or the number of nodes in a leaf has been been reached, or when all the elements in the leaf belong to a single class. Obviously, the decision trees are very prone either to overfitting by splitting too much, or to underfitting, by taking the decision to stop splitting too early.

These model parameters, which influence when to stop splitting, are tackled by hyperparameter tuning methods, which train trees with various parameters and then pick the most successful ones.

The bias to given by the training set selection (bagging) or feature choices are tackled by ensemble methods, like random forest or gradient boosted trees, which build several trees based on the input data to query from and then use voting to select the most accurate results.

Below is a very basic example of how to build such a decision tree, together with its visualization: 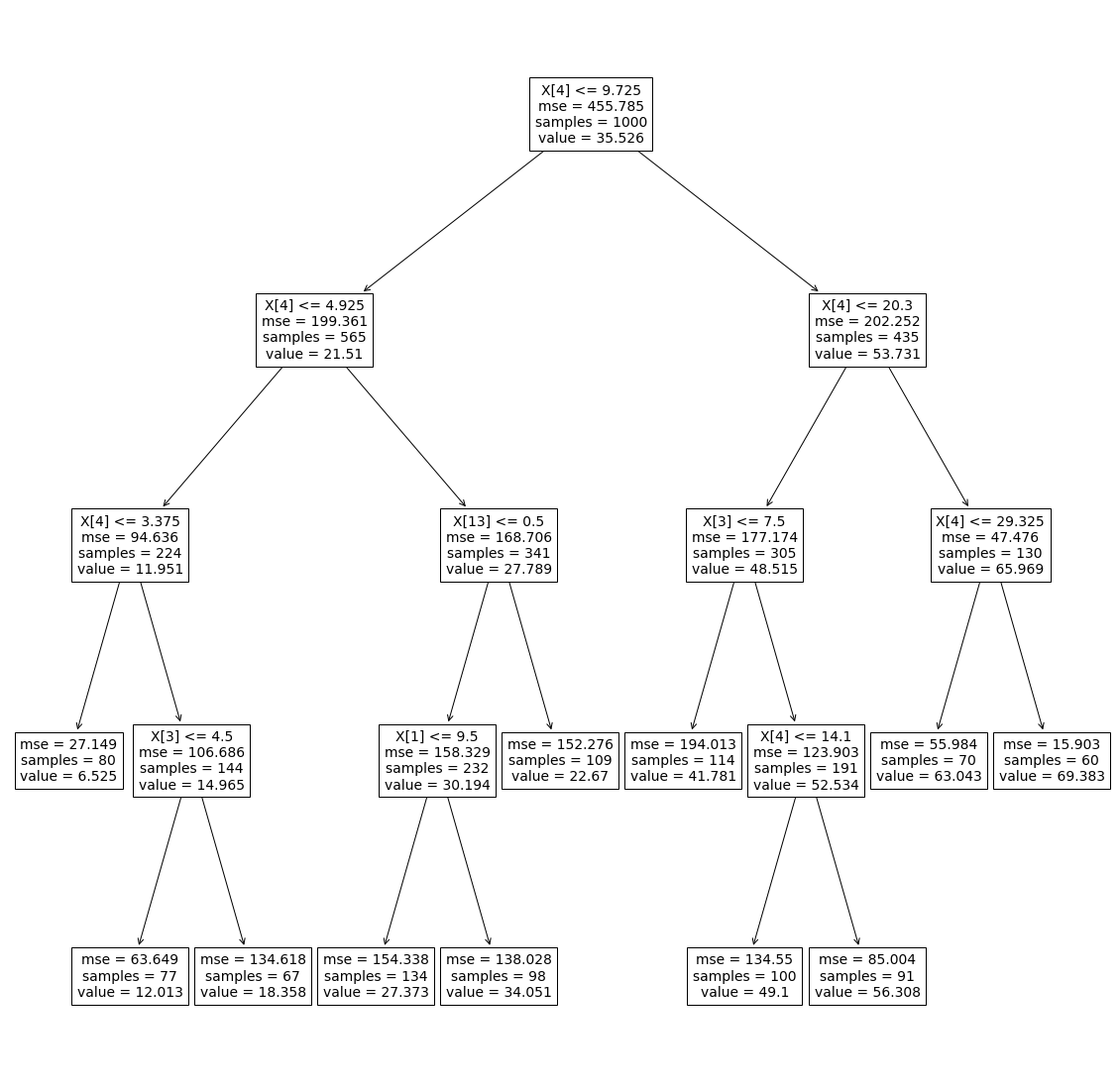 The tree above is a regression tree, built with numeric features.

In our case, we can see the Sum of Squared Error (SSE) is improved with every split. Taking the first node, for instance, we observe:

A little bit of terminology

Here is a little bit of terminology associated with the decision trees:

Building the decision tree is a recursive process. At each step a feature is selected and a value from the selected feature based on which to do the split. The selection is made such that the highest information gain is attained, meaning each group as as homogenous as possible.

Nodes are split based on their “impurity”. Impurity is a measure of how badly the observations at a given node fit the model.

For a regression tree the impurity is be measured by the residual sum of squares within that node - as we’ve seen in the example above. For a classification tree, there are various ways of measuring the impurity, such as the misclassification error, the Gini Impurity, and the Entropy.

For building the tree there are 3 general cases, each building on each other:

All Independent and Dependent Variables Are Categorical

The algorithm goes as follows:

We are going to analyze the following dataset, where the predicted variable is churn. The first step is to select which feature to split by:

Entropy (uncertainty) at the root node. By definition, entropy = sum(-p*log2(p)) where p is the probability of a class to appear in the given set.

Calculating the entropy reduction if we split by each feature:

Given the results below, we would choose feature ed for split as it gives the highest entropy decrease. 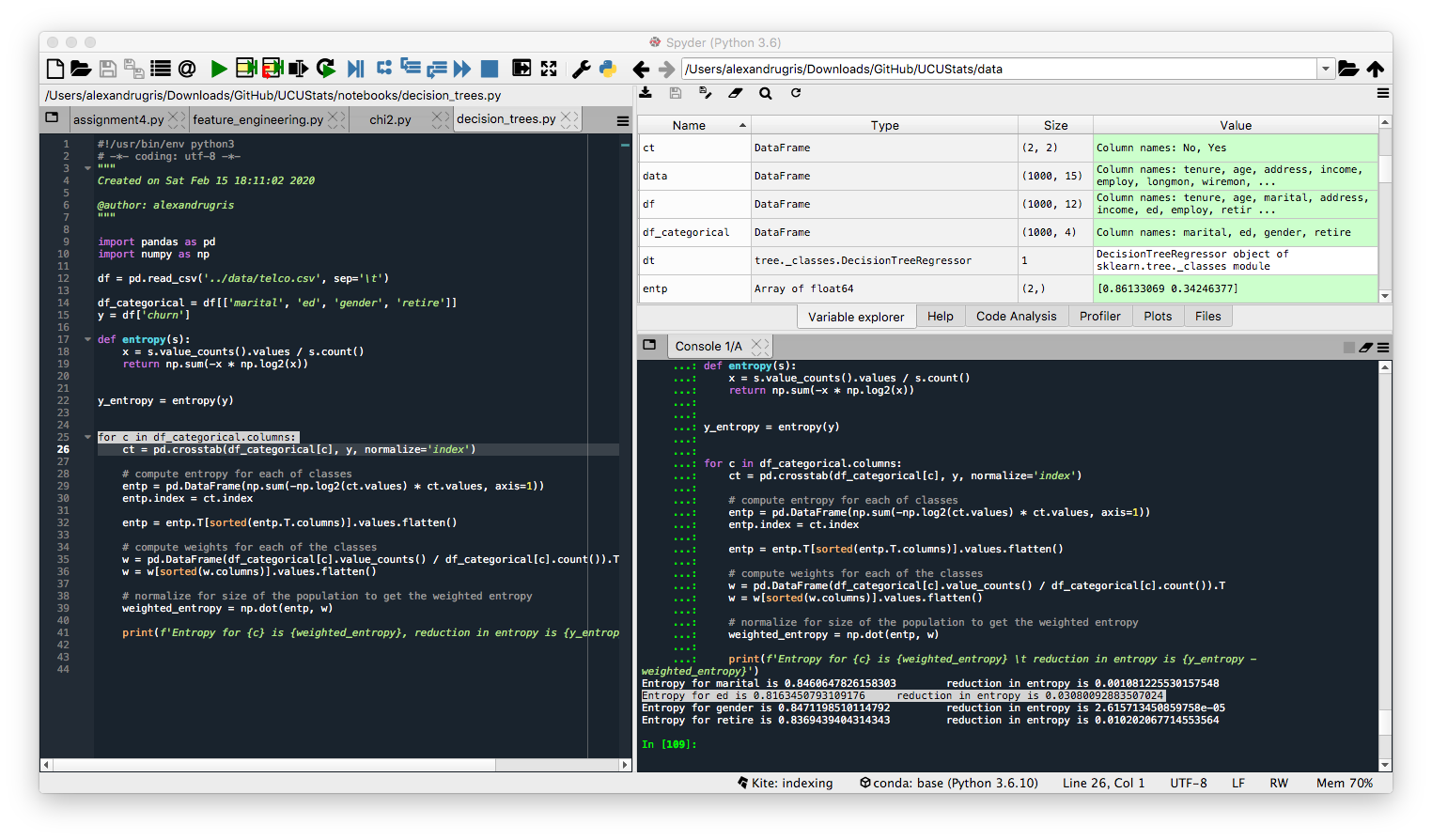 Broken down into individual steps, for the variable ed the intermediate results from each step are shown in the image below: 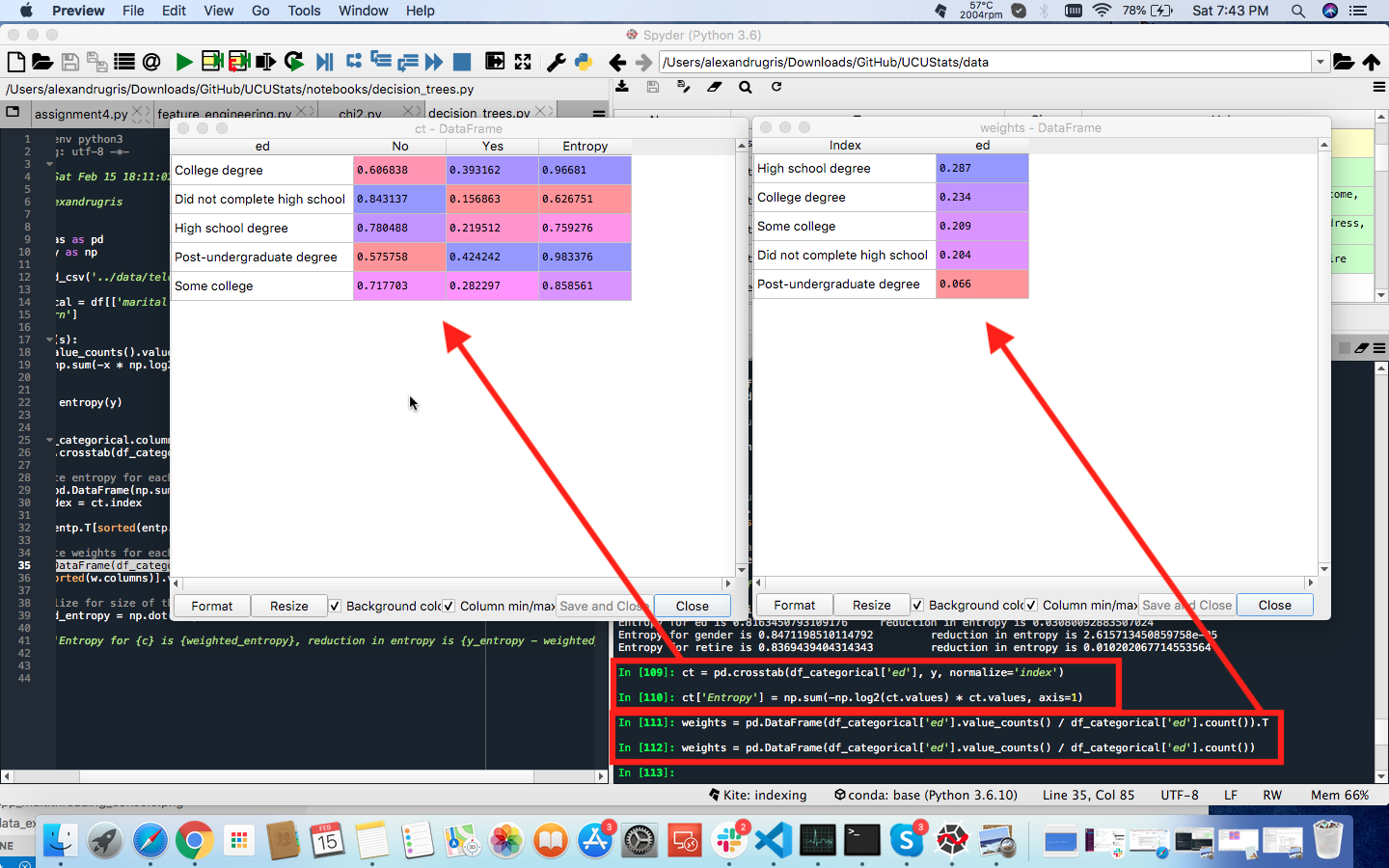 The next step is to find the right splitting point. We are going to use a measure called Gini Impurity to split the node in two partitions, each as pure a possible.

We define the Gini Impurity as follows:

For example, a group made of 50% males and 50% females would have a Gini Impurity of 0.5, which is the highest possible in this case. A group made only of males would have a Gini Impurity of 0, which makes it a pure node. In our case, the probabilities are the counts for the elements of each class divided by the total number of elements in the node.

Let’s do just that.

Let’s observe a little bit the data in between steps.

The gini dataframe, after initial setup and sorting by probabilities: 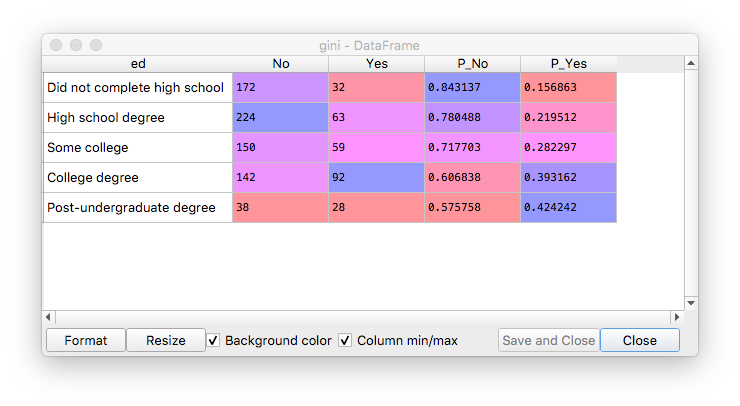 Impurity calculated in the loop, for each combination of possible values in the left-right nodes: 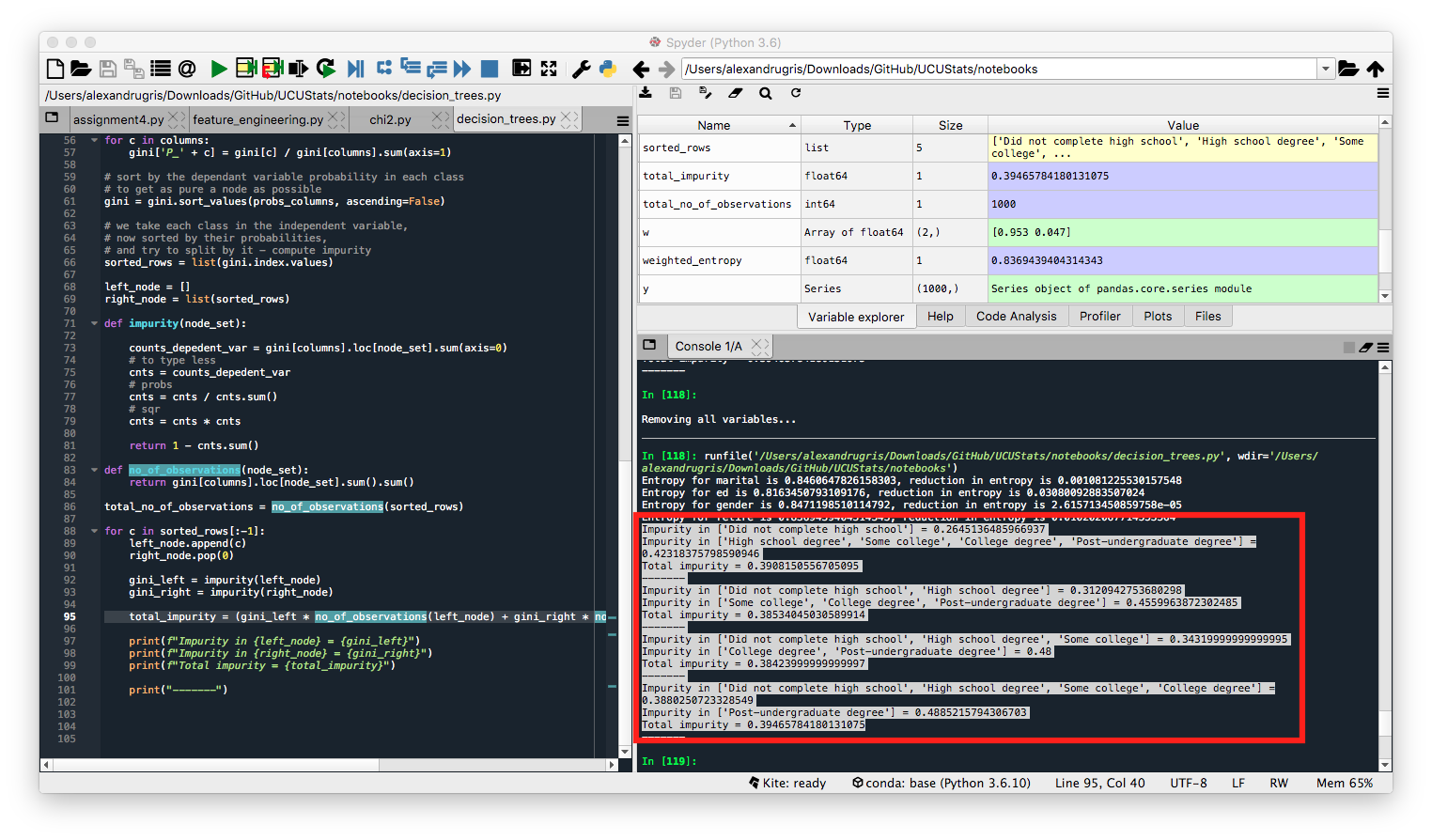 We are starting as follows: 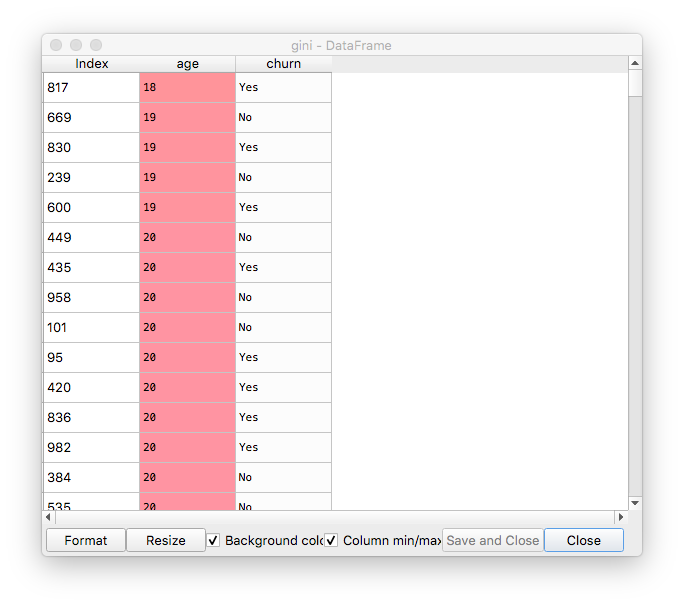 In our case, the age looks more like a categorical variable with many classes, but we will treat it as a continuous variable. This is why, in the next step we uniquify it.

Now, let’s compute the impurity for each value. The impurity will be saved in the df_splits dataframe. 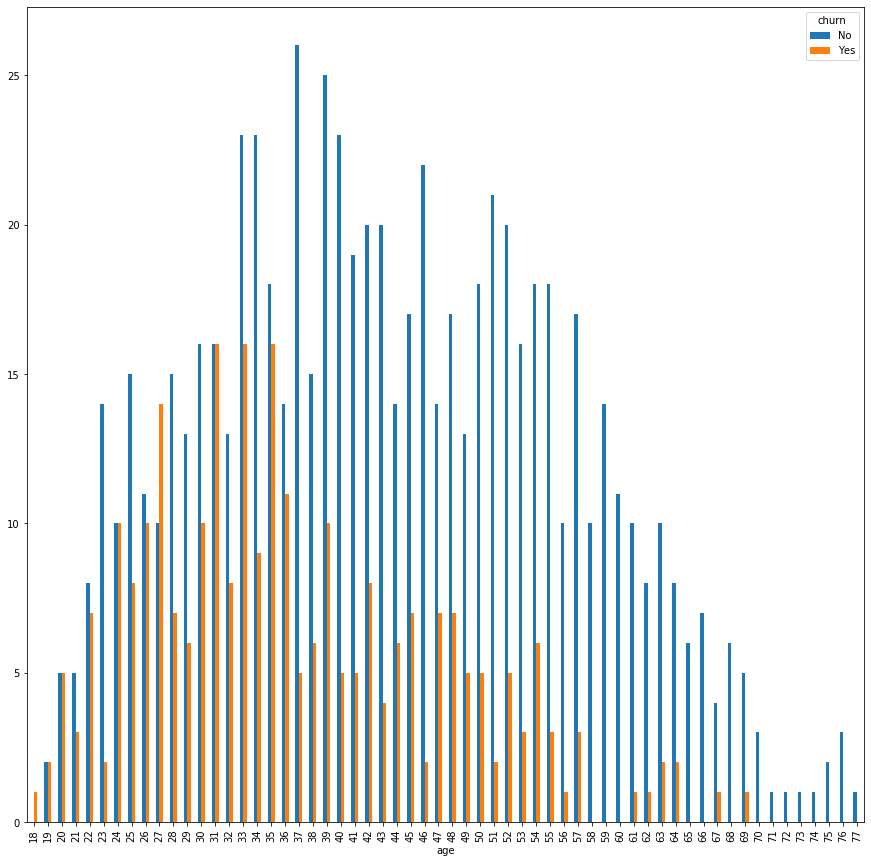 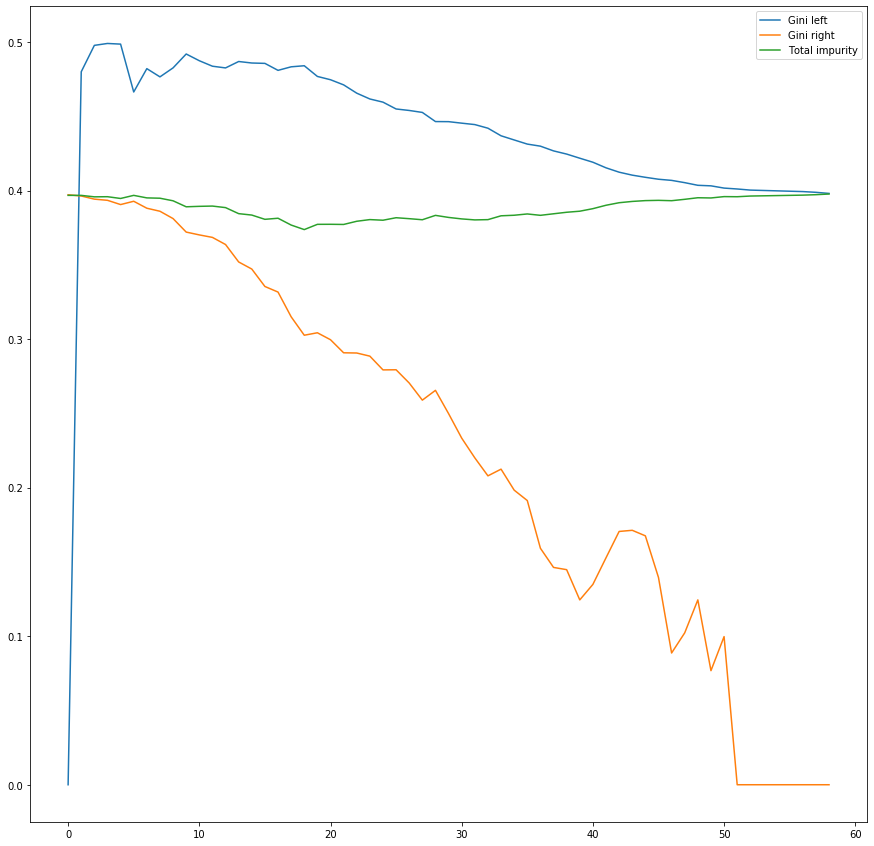 We observe the following:

By assessing the first bar chart, we intuitively see that after 36, the churn seems to decrease.

Now we can compute the entropy for the feature after the split:

Unlike the previous scenario with only categorical variables, if we have continuous variables we have to reverse the tree building algorithm as we cannot compute the information gain for a feature before we find the splitting point. Therefore, we’ll first find out the point of splitting to the left node and right node, if we were to split on each of continuous the variables. Once the left and right nodes for each of the variables are figured, we’ll calculate the information gain obtained by the split and select the feature that gives us the highest information gain. We use that feature and that splitting point as our next step in the tree construction algorithm.

For this case, we don’t have measures such as Gini Impurity or Entropy, as both of them depend on the response variable being categorical. Therefore, we can use the improvement in the Mean Squared Error as a measure of best split.

The algorithm goes as follows.

If the feature is continuous:

If the feature is categorical:

After all the steps above are performed for each feature in the feature set, select the (feature, split_point) pair which gives the highest improvement in the MSE and then continue to split the tree recursively.

As we can see, for decision trees we don’t do any dummy variable encoding on the categorical dependent variables. We treat them as they are.

In our classification tree examples, we used the Gini impurity for deciding the split within a feature and entropy for feature selection. Most of the time it does not make a big difference which one is used and they can be used interchangeably and they lead to similar trees. Gini impurity is slightly faster to compute, so it is a good default, especially for in-feature split-point selection where there are more calculations. However, when they differ, Gini impurity tends to isolate the most frequent class in its own branch of the tree, while entropy tends to produce slightly more balanced trees. SKLearn allows both.

As per parsimony principal Gini outperform entropy as of computation ease (log is obvious has more computations involved rather that plain multiplication at processor/Machine level).

But entropy definitely has an edge in some data cases involving high imbalance.