In this post I tackle basic algorithms for computing probability density functions and cumulative distribution functions, as well as generating random numbers according to a distribution. Afterwards, I will compute the Gini index (G) and the entropy (H) coefficients, which are used to measure how much a distribution differs from the uniform distribution. Towards the end, I will touch the topic of validation with two methods: bootstrapping and k-fold cross validation.

Generating random numbers according to a given distribution

Let’s consider two distributions I will play arond with in this article: 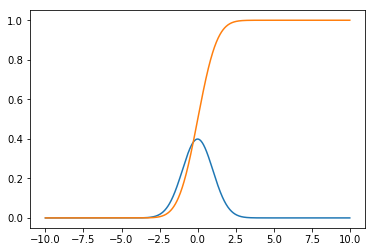 In order to draw the PDF, one needs to normalize the function so that its integral is 1 on the (-infinite,+infinite) interval - see the pdf function above. I kept the pdf, cdf, mean and sigma functions generic, so that they can be applied to any distribution, although for the Gaussian, pdf and cdf analytic formulas already exist. The integrals are computed incrementally, thus errors tend to accumulate. For precise results or for production code analytic formulas should be preferred (if they exist).

Using the functions cdf and pdf from above, I will generate a set a randomly distributed numbers based on the power law distribution. First part generates the numbers. func - the function, pdf_func - probability density of func and cdf_func the cumulative distribution - please note that cdf(func) and cdf(pdf(func)) produce similar results because cdf has normalization embedded. 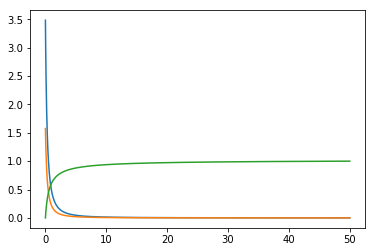 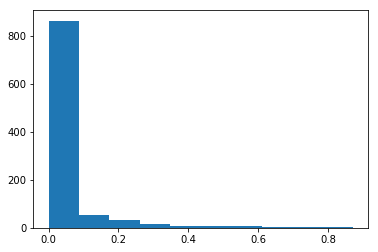 The rand_cdf takes as parameters two arrays - a uniform randomly distributed array with values between 0 and 1 and the CDF of the function I want my resulting random numbers to be distributed on. Then it computes the inverse of the CDF and uses the random numbers as indices in this array. Please see the CDF^(-1) below: 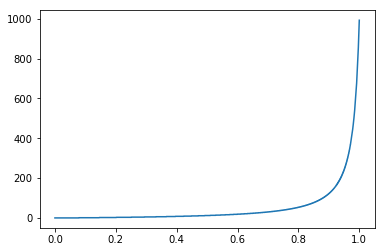 As one can notice, x axis is between (0,1) and y axis between (0, 1000), where 1000 is the size of the random number array. In plain English, it basically reads: “for any number received as parameter between 0 and 0.8, I will output a very small number. For any number higher than 0.8, I will output a larger number.”. As my input is uniformly distributed between (0,1), The probability of outputting a smaller number is much higher than outputting a larger number. How much larger? It is precisely based on the CDF received as input.

Thus, considering a categorical feature with p1..pn probabilities of occurence:

Entropy = H = Sum(-pi log(pi)) and it is smaller than log(n) where n is the number of categories. H for a uniform distribution is log(n) and it is the maximum entropy.

Entropy is a measure of unpredictability of the state, or equivalently, of its average information content. To get an intuitive understanding of these terms, consider the example of a political poll. Usually, such polls happen because the outcome of the >poll is not already known. In other words, the outcome of the poll is relatively unpredictable, and actually performing the poll and learning the results gives some new information; these are just different ways of saying that the a priori entropy of the >poll results is large. Now, consider the case that the same poll is performed a second time shortly after the first poll. Since the result of the first poll is already known, the outcome of the second poll can be predicted well and the results should not >contain much new information; in this case the a priori entropy of the second poll result is small relative to that of the first.

The formulas above translate to the following python code:

Plot the chart for the evolution of the entropy index for a set of probabilities [p, 1-p] 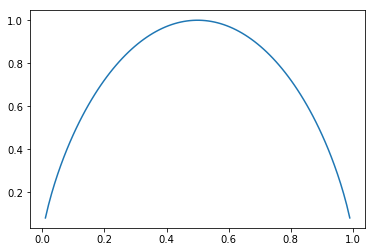 Gini index is referred also as categorical variance. It was initially introduced to “represent the income or wealth distribution of a nation’s residents, and is the most commonly used measure of inequality.” [Wikipedia]. We define it as a measurement for the average level of error for the method of the proportional classifier (proportional clasifier: given a feature which appears with a frequency f, its probability equals its frequency).

Evolution of Gini index (G) for a set of probabilities (p, 1-p): 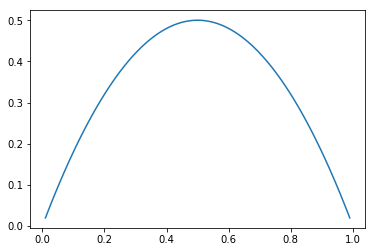 Mean, median, entropy index (H) and Gini index (G) are different aggregate indices (summaries) for a distribution. Because our sample size is not large enough, they are subject to measurement errors. If we want to understand a little bit better how much error our computed index on the sample data hides, we can compute its distribution (its mean and its stddev). For instance, if we take the mean as the parameter we want to investigate, we obtain the mean of the mean and the stddev of mean. But any other index can be considered. Two outstanding methods are bootstrapping and K-fold cross validation.

Bootstrapping is a resampling method which works like this:

Here is the code for computing mean variation through bootstrapping. We will consider a power-law distribution for start, with 20 extractions. 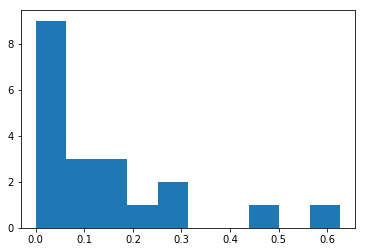 And the output - shows the distribution of the mean is Gaussian: 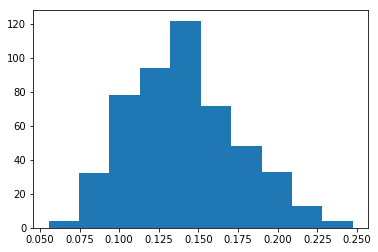 Intrestingly enough, as the initial sample is quite narrow (20 extractions), the mean and std-dev of mean vary significantly between successive runs of the algorithm.

Another set of validation techniques use the splitting of the initial array into two parts of pre-specified sizes: train set and test set, so the results obtained on the train set are compared with the data from the test set.