Block cipher is a very simple concept. It acknowledges the practical impossibility of sending a purely random, equal in size to the message, secret of the one-time pads and addresses it. It splits the message into predefined size blocks, then encrypts each block individually. Cipher Block Chaining takes the concept even further by taking into account the ciphertext generated for the previous blocks when encrypting the current block.

We want both confusion and diffusion to be as high as possible.

Similarly, we want a small change in the text to lead to a large change in the ciphertext. Therefore, we cannot simply apply the same key over and over the encrypted message, independently, block from block. That would encrypt the block itself, but patterns in the text would still be apparent when the same group of characters reappears. Therefore, we use the ciphertext from the previous block as a part of encryption of the current block. This ensures that every block in the message depends on all the previous blocks. Thus, a small change in the message early in the stream would lead to a large change of the ciphertext, spread all the way to the end, hence increasing diffusion.

Below is a very basic implementation of this concept, with a single XOR round and with block chaining.

One of the early implementations was DES, currently considered obsolete due to the short key length. A newer one is AES, which is run with keys 128, 192 or 256 bits. AES runs on blocks of 16 bytes and applies a series of rounds to to confuse the key, including operations like shifting rows, mixing rows, XOR-ing, side lookups. AES-256 is considered strong enough to encrypt government secrets.

When sending a message, the following order of operations must be kept:

Compression reduces redundancy in the message. If encryption is applied before compression, due to diffusion which is aimed at masking redundant patterns, compression becomes ineffective. Error correction adds redundancy to the message. Thus, if applied it the same step as the encryption, as the DES algorithm did, it decreases the encryption strength. If applied before, it loses its meaning as accidental information loss can occur during transmission, not at encryption time.

The principle of asymmetric algorithms is simple. The emitter keeps a function ciphertext = f(text) to himself while giving the recipient its inverse text = f-1(ciphertext). In more practical terms, I want to give you a an encrypting exponent e and a modulus m so that you can message^e % m = ciphertext while I can ciphertext^d % m = message, where d is the decrypting exponent.

The code below exemplifies the algorithm. The modulo exponentiation function is described in the previous post. Important to note that each chunk of message we can encrypt with this process must be lower than modulo.

But how do we get the encrypting/decrypting exponent pairs and the modulo? The maths goes like this: 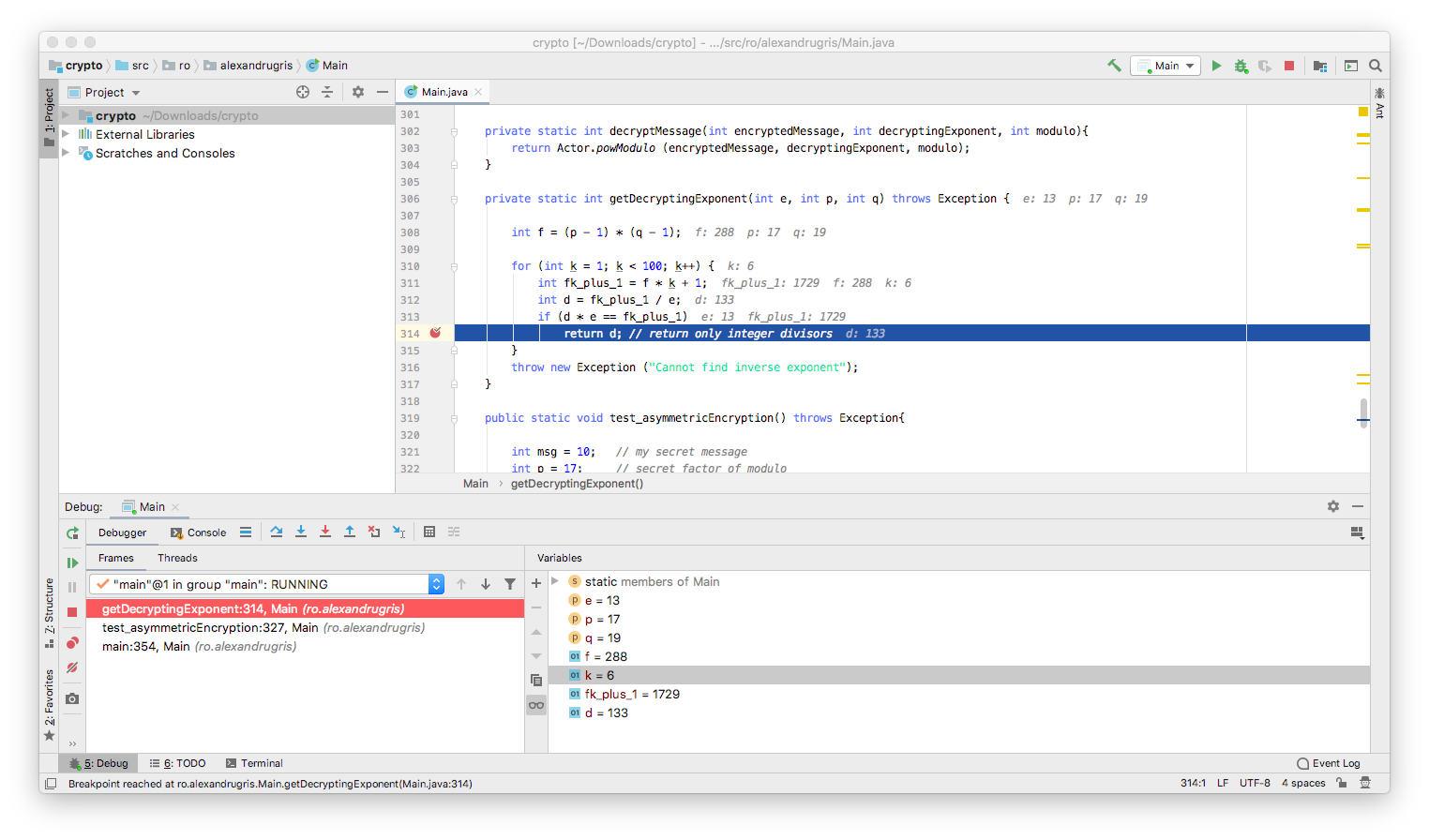 Let’s do just that: 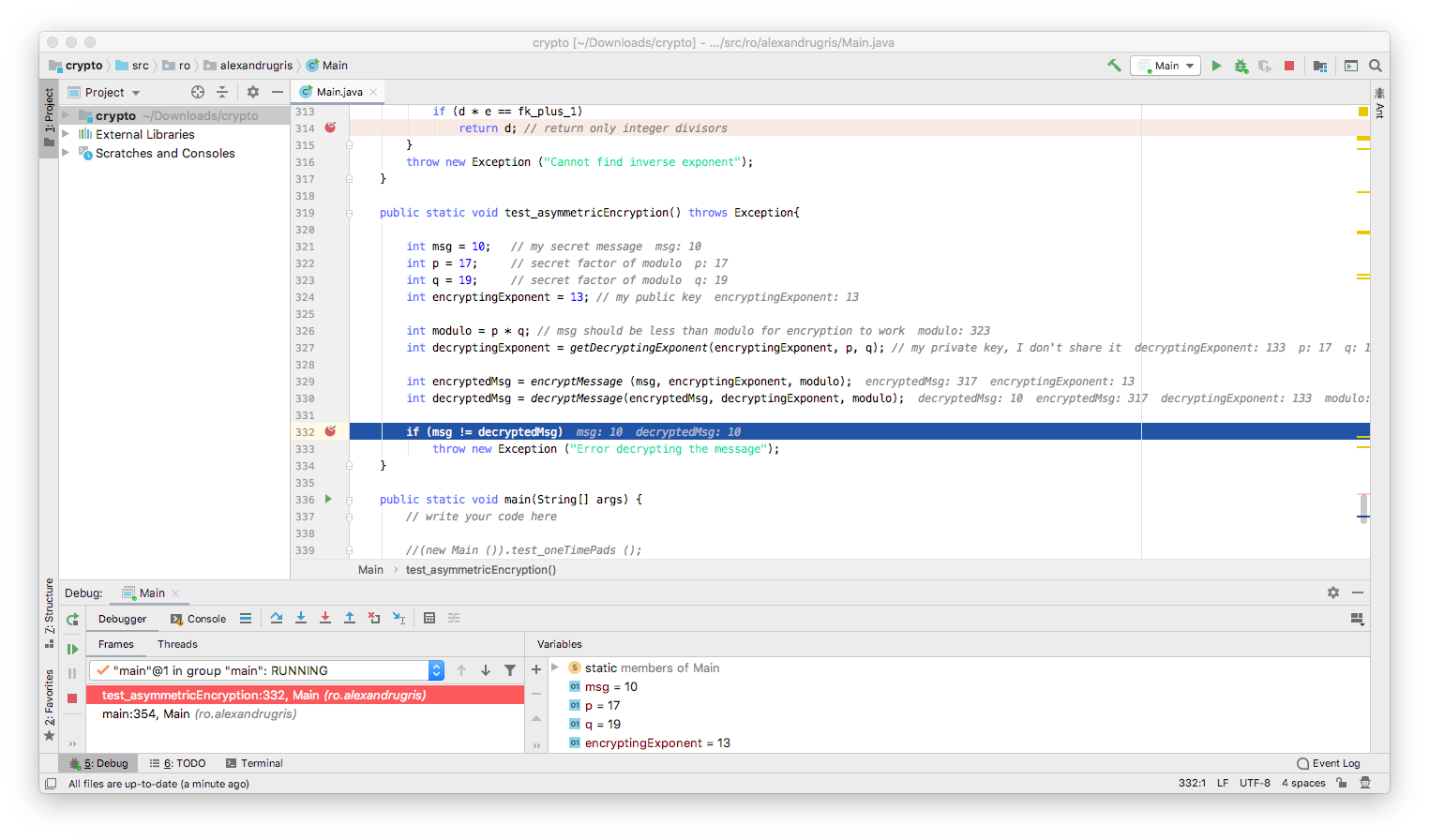 The algorithm above is a very rudimentary implementation of the RSA algorithm.

We’ve see in the previous post that, in order to solve the discrete logarithm problem and crack the Diffie-Hellman encryption, we need to perform a scan over the whole set of possible values, from 0 to modulo (variable COUNT is the modulo in our case):

Each extra bit added to the COUNT variable doubles the amount of work the algorithm is required to perform. Therefore, the complexity of cracking the code is O(2^no_of_bits_in_modulo).

In 2014 a paper has been published with an algorithm that would bring the discrete logarithm problem to significantly sub-exponential complexity. However, since in Diffie-Hellman the modulo is prime and in RSA it is a product of two prime numbers, the suggested heuristics from the paper does not (yet) apply.

If we want to validate that indeed a message comes from a specific person, we do the following:

The weakness is the hash function. If the hash function is easily reversible, a potential attacker could craft a message that has the same hash as the original message and pass it along with the originally encrypted hash. The message, at the recipient, would pass the validation.

Because of this, we need cryptographically strong hash functions. These functions work on the same principles as the CBC described earlier in this chapter. MD5, the first designed hash function, is no longer recommended for use, same for SHA-1 which came later. SHA-2 (SHA-256 and SHA-512) and SHA-3 are currently the gold standard in cryptography.

There is still an attack vector open - an attacker can generate a large number of messages that I am likely to sign and a similarly large number of messages that I would not likely sign. This increases the probability that he/she will find a pair of (likely-to-sign, unlikely-to-sign) and thus use my signature to validate his malicious message. Because of this, the protocol for using signatures requires that we never sign a message received from a 3rd party without altering it a little bit before, to generate another hash.